Over the years, it gets boring to throw alone, so you find other knife throwers. But after some time, it gets dull only taking turns in throwing at the target. That is why we collect game ideas on this page how to spice the throwing sessions up. All suggestions are welcome!

video with some playfull knife throwing training ideas has been produced by Stephane Carnage - don't mind the French, you'll understand. 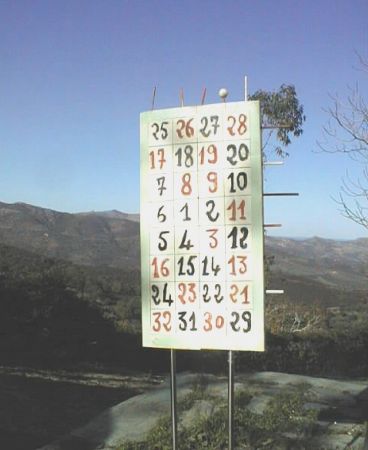 Philippe built a target with 32 fields (10cm x 10cm each) that are numbered. The task for the two (or more) throwers now is to stick their knives into the fields in proper order. He who reaches number 32 first wins. If the knife does not stick, or in the wrong field, it is the turn of the next thrower.
The game is only recommended for advanced, accurate knife throwers (otherwise, you will grow frustrated rather quickly). 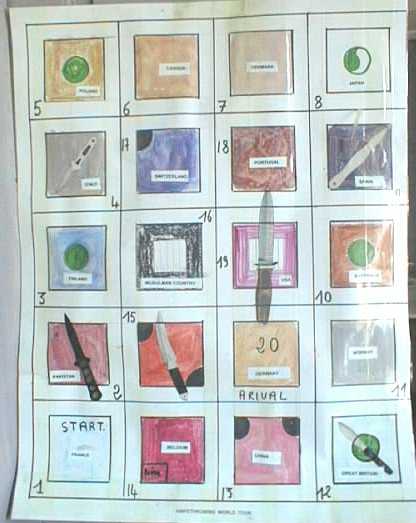 Again, you have to stick your knives into the boxes in the order of the numbers. If you don't hit the coloured inner box, you may continue to try, but have to pass to the next thrower if you don't even stick it there three times. A stick in a green area means you can jump over one box, a stick in a black area means you have to pass it on.
The boxes represent countries and have side lengths of 8cm (inner) and 12cm (outer).

Object of the game

The object of the game is to start by throwing knives and hitting the squares from the top left hand corner of the board and progress (as you would read a book) along the horizontal lines of squares one at a time, till you finish at the bottom right hand corner of the board. The first player to finish wins. Score for that round is the amount of squares advantage over the last player.

The board consists of 50 squares in a grid of 6 down to 9 across, of which 5 are double size squares. Outside dimensions 89 x 89cm. See diagram below. 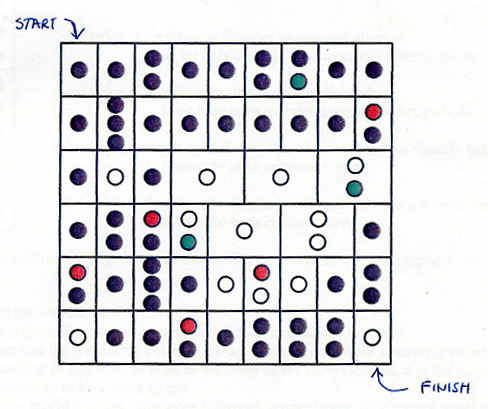 Players take alternate turns and throw 5 knives on each turn called a "Sheave". All 5 knives must be thrown at each turn.

As you progress along the board you will have to throw at different types of square, each of which have their own instructions as to how you must hit them in order to progress. These are the types you will encounter:

Some squares are larger, but are treated like any other square in all aspects.

A hit is given if the target square is cut into in any way by the blade. Knives that fall out during a sheave are not counted, only those remaining count. The scoring of hits must be done in the same order in which the knives had been thrown, it is the players responsibility to keep track of this. Multiple hits in a square only score if thrown in one sheave!

Sometimes you may reach a position on the board where you wish to end your turn, but still have knives left to throw (e.g. when wanting a whole sheave to attempt a hard next square). As you are obliged to complete the sheave, the way to do so is to throw and near-miss the target square.
But, you may not miss by more than a squares distance away, i.e. the near-miss must stick into a square in contact with the target square, even if these squares are only touching by the corners. If you miss by too much, with one or more of your remaining knives, you are obliged to throw your last knife again. If you throw and fail to score a near-miss again, then you have only one more attempt. If you fail again on this last attempt, then the knife counts as a hit in the target square, i.e. the square you were trying to avoid in the first place. See diagram below.

Sticking all of the knives in a sheave into any square on the board from the required spin distance allows you to teleport up to the square just behind your opponent, if playing alone it takes you to just ahead of the next red square ahead of you.

Get good, have fun, and keep hoping wife/girlfriend will finally allow you to throw at her!

For the regular get-togethers in his Yorkshire club, Englishman John Taylor invented the knife throwing game of Snife, a cross between flinging knives and

Instead of potting balls into pockets, you will be hitting circular coloured targets on a board (see picture). For each hit, you collect points, the player with the highest number of points after four rounds wins. 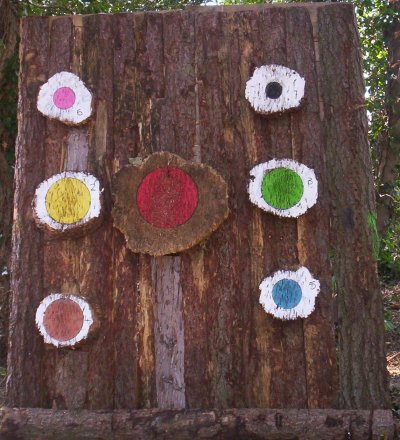 In the first three rounds, you start by throwing a knife (or axe) such that it sticks in the central red disc/ball. Then you announce a colour, and throw your knife to stick in the thus coloured ball. Then it's back to red, then back to a colour, and so on. For each stick, you collect points (see table below). The series brakes when you fail to miss the "on" ball (that is, the red or coloured ball you are supposed to hit with this throw). Wait for your next series while the other players throw theirs.

For the forth and final round, the red is out of the game, you have to hit the colour balls in the order of their point value (ascending from yellow to black). Note that the most valuable ball is also the smallest and hardest to hit.

Target details
The bottom set of targets/balls are at 70cm, middle set at 1.35m and top set at 2m (measured from ground to ball center).

In 2015, SNIFE was part of the World Championship in Knife and Axe Throwing, with detailed SNIFE rules (PDF/OpenOffice).

I invented a interesting throwing game. It is designed like a "combat" contest, so I usually use various printable silhouette targets in normal print-paper format. I throw many things, from throwing knives, big nails, screwdrivers and sharpened sprocket wheels to coathanger darts, razors, throwing stars, axes and spades, so you may want to alter something if you want to use knives only, but it should be fun nonetheless. To stop babbling and to describe the game itself:

It is better if you have somebody who designs the tasks for you, if you have not, write the tasks on papers, fold and scramble them, then draw them at random. You should have these groups of papers or tasks: Distance of throw, thing to throw, target to throw at, stunt to pull before the throw. For example: five meters, sprocket wheel, silhouette, parachute roll.

So you grab a sprocket wheel, sprint to the target, do a parachute roll somewhere on the way and as soon as you arrive to the "five meters" mark, you hurl the wheel on the target. Unless you are proficient with these written stunts, do not try them with the thrower in your hand, but have the thrower laid on the ground and grab it from there after the stunt.

You are always starting 25 meters - or whatever distance seems fitting to you - from the target board, but you must have some distance to run.

That's all, really. You can play with friends in the way that anyone does the same thing and a scoring system is established for the stunts and target areas, but I prefer to play it just like friendly, non-scored competition.

It is played just like the basketball version, where each person that has the word "PIG" written up is out. One person goes first and sticks a knife. The next thrower must stick his knife within ones knife's distance from the first throw. Failure to stick the knife, or sticking at a distance greater than the length of the knife results in a letter.
When playing with three or more people, if the throw gets returned to the original thrower, without a letter being issued, then the turn continues until someone gets a letter. When playing with only two people, if the second hits he gets to make the first throw of next round. This is so he is not always following.

Many of the games that you can play on a piece of paper can also be played with throwing knives. And I guess you know some of them from your school times. But here's some detailed suggestions by Alexander Morozov from St. Petersburg (video-subtitles in English):

terms/privacy
If you ❤️ KnifeThrowing.info, buy me a coffee
German: Spiele mit Wurfmessern