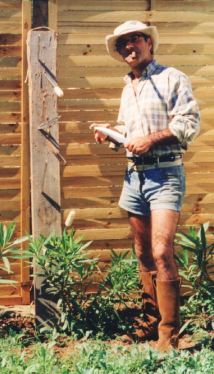 I think I've been born to knife throwing like many of us looking at movies and being impressed by the thrower.

When I was young from time to time I tried to stick my poor small pocket knife, but nothing serious. Last year I stepped over and bought, in one of the two gunsmith shops in the little main town, the two lonely dusty throwing knives that I saw there. They were expensive but I was happy buying the first real throwing knives of my life (see photo below, number #1).
I spent a few month throwing them.

At this time I did not know that there exist other kinds of throwing knives: of other form, length, weight and so on. And I was rather happy to throw them. I was not aware that they were too small (20cm) and too light (160g).

wurfmesser (German word for it). Bingo!

Of course now I wanted to try something different than my first knives. At Böker, I ordered ten knives " genuine flying dart" manufactured by Linder (#2). Not very expensive. I became used to them for short range. I threw them for a few month. Once again I felt like trying other kinds of knives and I ordered (again at Böker) five Linder knives "extra schwer model" (German: extra heavy, #3). But I was very disappointed. These knives didn't suit my own style. I was rarely able to throw them properly, because they are made to be thrown by blade and handle, and I don`t like that. I don't know why. I was disappointed because I spent money for nothing and I do not throw them any more.

So I ordered a model that I find very beautiful, even though it does rust: it looks like the "viper" (#4). With it I was rather happy from 3,60m. After a moment I knew that I had to try something longer. I was fed up to spent money without being entirely satisfied. I decided to built five spikes using "a piece of full d'inox de 10 mm". I cut 5 pieces of 40cm, and made the handle out of this sort of plastic the butchers used to cut the meat on (#5). Very easy to built and absolutely cheap and very good sensations.

After a while I decided to buy an "expensive" knife and I opted for the Böker night dragon (30cm, 270g, #6). Bingo! At least a knife I feel totally good with. It demands me not too much power, and often goes straight on in the target. I feel very good at one and half turn and two and a half. I know now what will be in my shoes next Christmas.

My story gave me an idea. Why not doing something like a throwing knife exchange?
Say, Mister X has five or six different knives. And among these knives there is one I would like to try. And in my own collection there is one that he would like to try. I send him this one, he sends me his, to keep for instance for two or three weeks. That way, we could try several kinds without the risk of buying a knife that we don't like at all. It's just an idea, but contact me if you are interested! 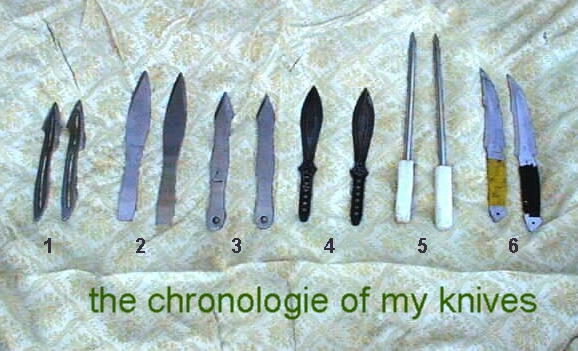