Self made throwing knives

Some knife throwers do not content themselves with searching through all stores for their perfect throwing knife, but go ahead and design their own. This collection presents some of these homemade throwing knives.
If you want to make your own, follow our instructions on how to build a throwing knife.


Heavy knife made by Kari Salonius

This throwing knife was sent to me by Kari Salonius from Finland. He works as a blacksmith and forges knives for friends in his free time. This piece is made out of Hardox, a metal that is often used for bulldozer scoop claws. It can`t be tempered but will not bend easily.

The knife is quite long (33cm) and heavy (400g), but the proportions are right, and the center of gravity is in the middle. About the ideal combination for longer distances. The edges are all rounded, as well as the end of the handle.

If you grip the handle, you naturally end up with your thumb coming to rest on the diamond-shaped swelling. The curved grip rests nicely in your palm. This could also be considered a disadvantage, as you can not vary your grip to accommodate for distance and personal preferences (especially the normal hammer grip with the thumb on the side is quite shaky here). The grip on the blade, which is very secure and full due to the curved blade, gives you full flexibility.

The blade is not sharp, of course. The knife has a thickness of 6mm and is getting thinner towards the tip, making it stick very well. The longish form of the tip also helps.

It is rather fun to throw this knife, with its good looks and flight characteristics.

In the follow-up version of the knife, Kari Salonius has changed an important point: The grip is not as wide, not curved any more but straight, and longer because the swelling moved two centimeters towards the tip. This now allows to grip the handle in a variety of different ways, giving more flexibility. A second swelling was added, but the so created valley can not be used as a rest for the thumb, as the finger will catch there on release.

Interestingly, the valley allows to throw the knife like a spear, just hold it there between index and middle finger with the thumb supporting the weight from below. Thrown properly, it will not turn but fly with the tip always facing the target. Not being designed for that spear style throw (in contrast to the Gyro Dart), it is hard to get much power in it, so that it will only stick in soft wood.

The new design throws very nicely, only the tip is not flat enough to penetrate the target easily.

Kari Salonius wanted a throwing knife that is acceptable in historical reenactment groups, thus it looks very much like a mountain-man hunting knife. The handle consists on two leather-slabs glued to the steel, then additionally fixed with copper rivets. The rawhide was sewn on while wet. The edge has been quenched, so that the hard steel there can be sharpened for camping tasks, while the softer spine will prevent the knife from braking at impact on the target.

With a length of 29cm and a weight of 434g, the knife is definitely of the heavier variety. The steel is 6mm thick, but narrows down towards the blade, test throws proved that it sticks very well. The distance for one full turn was 1.85m. Being almost center-balanced, it can be thrown from the handle (recommended) and from the blade. Surprisingly, from the same distance you can use both grips! This is because the sharp blade requires a deep blade grip that slows down the rotation.

This is the first throwing knife I would say can be used both for throwing and for camping chores.

Michael from Bavaria, Germany, is pursuing his knife throwing hobby nearly scientifically. He was not entirely satisfied with the knives available in the shops and started designing his own. He came up with this knife, but is still developing new designs and improvements.

Because not everybody has an own forge, the knife is made from a rather soft sheeting with a thickness of 5mm. It is 28cm long, weighs 294g and has its center of gravity in the middle. The edges could be rounded, but do not disturb. If you grip it by the handle, the thumb comes to rest on the edge between handle and blade, the rounded grip end not hurting your palm. Because the handle is not curved, it does not snuggle to your hand like with the knife of Kari Salonius. On the other hand, this gives you absolute freedom to vary your grip, you can even slide up on the blade without a spiky swelling hindering you. The blade grip is perfect.

The knife does look rather angular, some roundings would improve it. Also the tip is not getting flat enough, making it harder to stick the knife.

All in all, this knife is something for the thrower who wants full control over his tool: he can vary his grip in many ways, and does not need too much force for throwing. The little drawbacks mentioned could be eliminated in a future version.

Instructions how to make this throwing knife 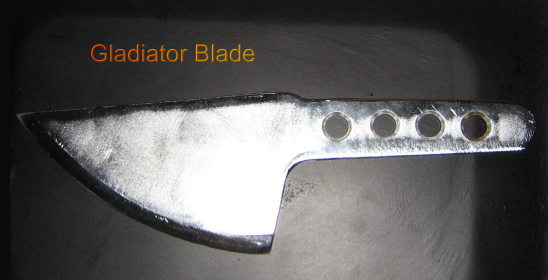 After being satisfied with the burning fire-fakas, the Fire Gladiator started on a new project, the Gladiator Blades. This time, he did not do much planning beforehand, just put his hands to work, he wrote:

"I just took some 5mm-scrap iron sheet, and worked on the shape for 5 hours straight. Than hardened the material, and took it for some test throws. Afterwards, it was ground into final shape. For showing off, I had my knives galvanised at a friends workshop, using copper and nickel, which resulted in a nice surface energy. Hence, my gladiator blades are rustproof.

The throwing knives have a weight of 250 grams and are 180mm long. I throw them with a hammer grip, and when going for a full turn, I stand in a distance of 3.80m to the target. When throwing the blades at my thick oak rounds, I have to use quite some pressure in the throw and use a very clear motion. But in normal planks or wooden target walls, my Gladiator throwing knives stick very good."

Most makers of throwing knives, do produce just a few knives of every kind, for their own use and some throwing friends. Björn Williamsson from Sweden went further: After arriving at a throwing knife design he deemed perfect for his needs, he gave it a name, "Knifen" and started to sell it in his own

The throwing knife has a very elegant, high-quality look, with a tiny ornamental cross guard and skeleton holes in the end of the handle. The best thing is, despite its sharp looks, the blade does not cut! A ridge around ½mm wide has been left standing, so you won't accidentally cut your hand. Nonetheless, I prefer the blade grip with the blade pointing away from your palm. Thrown this way, I consistently stick the Knifen with ½ turn at 3.2m. With a handle grip, I stand at 2.75m for one full turn - closer than usual. The skeleton holes help in having a consistent grip for the handle throw, you just have to take some care that they don't catch in your hand on release. Even with the slight curve on the handle the Knifen is also suited for no-spin throws. Altogether, I really like to use it for blade throws.

Technical details: The throwing knife is 26.5cm long, being rather light for this - 164g. It is balanced nicely. The steel is not stainless.

Werner Lengmüller from Germany does not only throw very well (five medals at the 2013 Championship), but also makes throwing knives. This here is a model based on the Branton-Emerson Tactical Thrower (designed in 2007 by

Looking to buy Werner Lengmüller's knives, such as the Pirate Spinner? Go to

Prince Steel Knives (USA) to see if they are in stock.

Grafknives from Poland offers very robust throwing knives, that either follow a classic ancestor (such as the Bowie), or are newly designed for a special purpose (such as the "Juggle"). The production is rather professional, Michał Prądzyński of Grafknives has his knives made by a friend of his who runs the

Melon Tools company. The throwers are made of 40HNMA steel, a robust Polish construction alloy steel, that is hardened to just below 50 HRC Rockwell. Yes, those knives will catch nicks, but you can easily file them plain. The surface is galvanised with industrial zinc coating - which means the knives have a good grip and are

rust protected, but you might have to wash your hands after training, as a scratch in the coating can leave black stripes in your hands for a while. Don't hesitate to

We had the possibility to test two of his knives, the T1 Personal (front) and the T5 Juggle (back):

The Personal is a remake of the classic Bowie Axe. The first thing you notice will be how accurately manufactured the knife is. The handle is straight, which makes for a smooth release. The blade back maintains the same thickness just to the tip, which provides a sturdy tip, but over-rotated throws will not stick well. The blade itself maintains a thickness of 1.5mm, which I like because it won't cut your hand.
Specifications: weight 435g, length 35.0cm, thickness 5mm, centre of gravity in the middle;

The Juggle has a inward curve of the (blunt) blade that lets it be handled in the air more easily. But careful, the tip is still pointy! It rotates fast, for a distance of 3m, the handle is not entirely in your hand as usual, put protruding 2cm from the bottom of your fist. The profile of the knife is such that you can comfortably put your thumb on the spine, which slows down the rotation even more.
Specifications: weight 331g, length 34.9cm, thickness 5mm, centre of gravity shifted 1cm towards the handle from the middle; 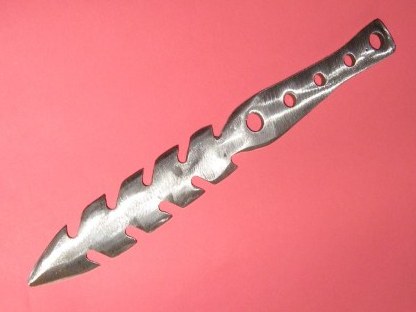 This knife is entirely handmade. I started with the idea to make a throwing knife unlike others, with saw teeth in it.

As material, I used plain iron, 4mm thick, 3cm wide and 22cm long. After transfering my technical drawing to the iron, I defined the shape with a small angle grinder. Then I added holes in the handle and in the blade, which I extended to form the saw teeth.

Tempering was accomplished by putting the knife in coal, heating it until it glows, then dipping it in old oil, and putting it back into the coal (covered in glass wool), to let it cool down.

After some surface polishing came out this nice throwing knife. Because of the teeth, it can only be thrown from the handle. My preferred distance is around 4-5m.

These throwing knives were manufactured by Roy Hutchison from London especially for throwing no spin.

Roy explains how he made the throwing knives, and how to throw them no spin.

terms/privacy
If you ❤️ KnifeThrowing.info, buy me a coffee
German: Selbst gemachte Wurfmesser