A throwing knife turns in flight like a cartwheel. It takes lengthy training to get it reach the target tip first. The Gyro Dart eliminates this challenge: in flight, its tip always faces the wooden target, into which it sinks with a satisfying thunk.

Paco Tovar in 2002. Over the years the basic idea remained the same, but construction and handling have been refined continuously. The result is a throwing knife that's pure fun: The Gyro Pocket reliably sticks in the target after only few training throws, regardless of previous knife throwing experience.

The throwing knife is suitable for distances up to 9m. For a start, go stand on a big lawn, hold the knife in a loose grip (detailed below), and throw it with a loose wrist. After the first few tries, the knife won't turn like cartwheel any more, but will fly straight! Now get a wooden target (minimum 70cm squared, you don't want to concentrate on the aim yet), stand in a distance of 5m, and Go at it!

The Gyro Dart is a throwing knife you can just take out into the garden and see what you can turn into a target. And from which special positions you're still able to stick it!

A sturdy leather sheath with belt loop is available as an extra accessory - meaning the Gyro Dart can be handy for camping, too.

Buy this throwing knife directly from the Inventor!


Learn how to throw spear style 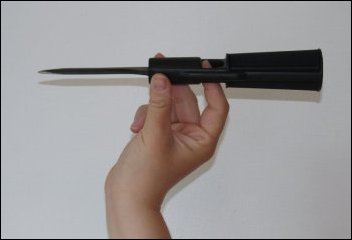 The knife flies wondrously straight as long as you heed these two hints:

Once you got the move down, it has a very natural flow, and you don't need to concentrate on it any more.

The throwing knife has a length of 25.5cm. The handle (max. diameter 4cm) is made from Zytel 801 and very robust. Made from carbon steel (AISI 1045), the blade is 10cm long and 4mm thick, the tip is very sturdy (obtuse angle). The blade is blunt enough not to cut your skin, but primed for sharpening.

Why are the Gyro Dart and the Gyro Pocket easier to master than the Flying Knife?
That's mainly due to them being shorter, which means that in flight, the oscillating movement dies down quicker. The lower weight and the smaller diameter of the launching head help.

Why "Gyro"?
The name owes to Paco Tovar's idea that the knife turns around its longitudinal axis, like a spear, thus stabilising the flight due to the gyroscopic effect.