The World Championship in Knife and Axe Throwing 2016 took place in the Italian Dolomites - evoking memories of the 2012 event. From July 21st to 24th, the

knife town of Maniago was host to the EuroThrowers World Championship - and in parallel holding a knife festival. As a historical knife manufacturing town, Maniago has a reputation similar to

Solingen in Germany - and showed off its craft: On the central piazza, Damascus steel was treated, and in the Palazzo d'Attimis, custom knife makers presented their beauties. My personal highlight were two young smiths, him and her hitting the hot iron in turns, artfully producing a catchy tune.

The championship was organised by the Italian club

SILCA, with the team around president Stefano Cristini being alert to flexibly solve any arising hiccups in the orchestra of the competitions. The food provided directly on the walled-in competition grounds (called "La Centa Dei Conti") was also very Italian: City volunteers had set up a kitchen, and offered freshly made specialities such as Frittata and

Caponata. With the temperatures going beyond 30°C, it was a good thing the bar was open all day. To deal with sweaty hands, the participants had their own remedies, such as a bag with fine sand from Brittany (Pierre's solution).

Again, the World Championship was the largest gathering of knife and axe throwers worldwide: 133 participants (104 of them male) from 11 nations came to the traditional Big Throwers Meeting to exchange ideas and compete. The Russian team, a strong presence since several years, for the first time made it to the podium in the country ranking.

During the weekend, there were always 15 spectators on site, who came over from the knife festival in town. They were often more interested in the diverse throwing activities at the training targets, then in the very orderly precision throwing in the competition area (which was also roped off more generously).

Apart from the World Championship walkback event, the speed throwing and long distance throwing, there were two new experimental events, selected by the organiser SILCA: with slanted target the goal was to stick knives into planks being put up on a slanted angle to the ground, target areas being painted on. The key was to adjust the distance by choosing where to look. For hunter, a hoop was thrown onto the ground, and the participant had to remain in it for the throws - without knowing the distance. Two targets where slanted, and one tree round even swinging - a challenge putting new faces onto the podium.

The instinctive throwing event saw a participation of 31 throwers that used unique styles to throw their knives without them spinning. The no spin aficionados were very active in giving brief courses in their art to curious people from the vast majority of traditional spin throwers, to educate them about their throwing philosophy.

For the speed throwing event, stylish knives were provided. The sponsor

LionSteel designed and produced them specifically for the Championship, and each participant was offered one to take home as highly polished memory.

Again, many knives changed hands in Maniago - mostly bartered for other knives, but beside the arbiter tent there also was a table with custom made knives (hand made or produced in small batches) offered for sale by participants. As usual, the interaction between the participants of the throwers meeting was very friendly and open.

The World Championship in Knife and Axe Throwing was a great success. The athletes were delighted by the cordial, relaxed atmosphere, the clearly structured event grounds, the great food and the varied events. Many thanks to Stefano Cristini, Maurizio Davani and all the helping hands from SILCA for making this World Championship happen!

18 member clubs) has the concern of making sure that there is a common Championship each year, and negotiates standard rules for it. The organisation of a Championship is always accomplished by a local club – this year it was hold by KATTA UK. The EuroThrowers assist in planning, and care for the international promotion of the event.

A big Thank You to Jacqueline Boof, the treasurer, who tended to the lists, and collected the membership fees on site! 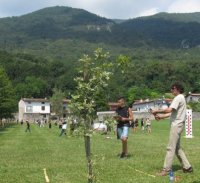 A big Thank You to all the people that made this World Championship possible:

Maurizio Davani for working tirelessly in the preparation, and in the recording the official results.

Duri Vetsch and Christian Thiel of the

EuroThrowers for the international promotion and coordination.

Rules for the 2016 Championship

The rules used for the Championship in Maniago were published months before. They are listed below.

One change to the published rules was announced on site by SILCA:
The organisers could not put a human or animal silhouette on the target board, as this would have violated local customs, and would not have been compatible with the image of the sport that they are promoting. Hence, the silhouette was replaced with a narrow geometric structure, closer to the target circles, and the scoring was simplified to +5/0/-5 points.

We always employ the

available in 7 languages), which means we will do the following events:

As a novelty addition, we will include:

The combined precision rankings are the basis for the qualifications for World Championship Precision, and the ranking of countries. There are no other rankings that combine several events.

Put as many knives in the target as you can in 20 seconds. Distance minimum 3m. Minimum weight 170g. (Same rules as last year.)
Detailed speed throwing rules: PDF / OpenOffice

This event will require to evaluate the position of the target and its distance. For knives and axes.
Detailed Hunter rules: PDF / OpenOffice

Knives have to be thrown into a slanted plank. Target areas further away are worth more points.
Detailed Slanted Target rules: PDF / OpenOffice

Knife throwing into targets that are grouped around a silhouette. Hits inside the silhouette will cost you a penalty of minus 10 points. Distance minimum 3m.
Detailed Silhouette rules: PDF / OpenOffice

Throwing with a half or no spin. Please note that in 2016, due to time constraints, there will be no second run.
Detailed Instinctive Throwing rules: PDF / OpenOffice

terms/privacy
If you ❤️ KnifeThrowing.info, buy me a coffee
German: Weltmeisterschaft im Messerwerfen 2016