Holidays, Big Throwers Meeting, and the

EuroThrowers European Championship: that's what Forni Avoltri was for the participants. Those who didn't go to Venice or Croatia afterwards just came from there. Thus most of the international knife- and axe throwers were already on site on Friday - some like John Taylor got there even days before to help with the setup of the targets and laser-precise placement of the distance marks.

The event location in the village of Forni Avoltri is located in the Carnic Alps in northern Italy. From the biathlon-centre* where the competition took place the athletes enjoyed a breathtaking view of the surrounding peaks.

Locally, the event was organised by Gaetano d'Avenia, Gabriella Mestroni and many more helping hands from the club "Giusto verso Carnia throwers". They were so impressed by the ambience

last year in Herrischried that hosting the European Championship at their place was "making a dream reality" as Gaetano put it in the opening speech.

On Friday, the participants registered and started training. In the thin air, the twangs and chimes of missed throws were only to be heard as a remote sound. 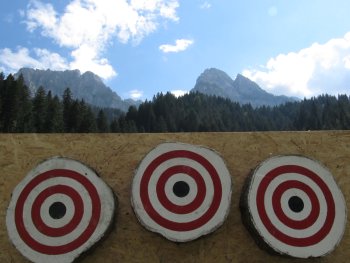 The competitions started Saturday at 9 o'clock with an opening speech, and shorts explanations about scoring (raise your hand to go to the target with the referee; The

European Throwing Rules themselves were applied as fixed in 2010).

87 knife throwers and axe throwers (among them 15 women) participated, besting the old participant record of

Villeflambeau. The throwers came from 10 different nations (IT, DE, FR, CZ, CH, RU, UK, US, FI, PL), 6 of the throwing clubs being part of the EuroThrowers had sent representatives. Right after the event "long distance" the social evening commenced: a get-together comodo in the Biathlon restaurant, enriched by a menu consisting of local specialities. Gaetano received a Happy Birthday serenade, and everybody a piece from his cake. Later at night, the terrace was transformed into a dance floor, the DJ playing hits from all the countries present really got the young crowd going. Meanwhile, ten knife throwers returned to the targets and, vision aided by floodlight, competed in the Duel Cup. The winner, Ashot Matevosyan, received half of the starting fees, the rest went in equal parts to the local organisers and the EuroThrowers.

Some participants had equal number of points, so Sunday started with play-offs. The Triplice competition afterwards is a discipline invented by Giusto verso, and involved tactical manoeuvring with distance-point multipliers. In the following award ceremony, the major, district administrator, principal referee Maurizio Davani, Gaetano and Gabriella took turns handing out certificates and prizes (Prosciutto sponsored by

all-time records were set, amongst others Mimi Dell'Anna improved on her own one in axe 4m to now 87 points.

For the perfect hosting of the Big Throwers Meeting and the European Championship, again many thanks to Gaetano d'Avenia, Gabriella Mestroni and all the helpers from "Giusto verso Carnia throwers".

* Without snow, the centre is used to train for ski-roll: gliding with short skis on rolls over tarmac slopes.

The meeting on worldwide competition rules, scheduled for Sunday, had to be cancelled due to time constraints. The discussion is now held via the

mailing list of the club .
Originally we intended to hold the European Championship 2012 in Moscow. Unfortunately still in the beginning of 2012 it could not be found out how it is possible to legally bring throwing knives to Russia for the event. Thus, the organisers had to withdraw their application, and are working on making the event happen in Moscow in one of the coming years.


* If there was a tie on the first three places of a discipline, the affected participants each threw new rounds (results given in parentheses), if necessary multiple rounds.. The ranking for the first three was then determined according to the points achieved in the additional rounds.

Alexander Martynov, thank you very much for your invaluable help in transcribing and checking the list of results.

Out of the scope of the European Championship, the EuroThrowers duel-cup was held (

A special competition organised by the local Carnia Throwers, also out of scope of the European Championship. The knife-event is a duel-competition with elimination, similar to the Duel Cup. The duels are run as follows:
Each participant has three throws per duel. From 3m, he has a maximum of 3 throws; from 5m, maximum 2 throws; from 7m, maximum 1 throw. The points are calculated as follows: from 3m, as usual; from 5m, double the points; from 7m, triple them. The maximum number of points attainable is thus: 5*3 (from 7m) + 5*2*2 (from 5m) = 35; The two duellers take turns in throwing, the beginner is randomly selected.

terms/privacy
If you ❤️ KnifeThrowing.info, buy me a coffee
German: Meisterschaft Forni Avoltri 2012