This years meeting, the 9th in a row, was the biggest and longest so far in Europe. Many international participants already got there on Thursday, to settle down in the holiday-houses rented in the area, or simply put up their tents. Friday was pure throwing fun, with the training targets put to good use, and throwers exchanging notes on their respective throwing styles and equipment. On Saturday, the registration office was busy with 71 throwers from 8 countries (Germany, France, Italy, Russia, England, Poland, Switzerland, USA). For the first time, there were participants from the UK (John and Richard), the USA (Mike Bainton, president of the largest throwing association in the US, the IKTHOF), and Russia (the group from the Moscow-based 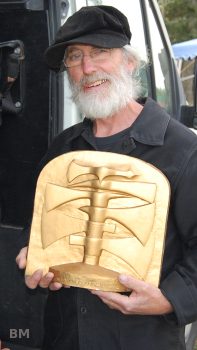 Thanks to the excellent preparations by the local organisers, Bernadette and Dominique Gagnon, the competitions rolled smoothly. For the first time, the

European Standard Rules were used. The only problem was a gusty wind, who changed the flight of many a knife.

For the thirsty, there was a low-price bar, and for the hungry, there were 4-course French meals for lunch and dinner. From the aperitif to the cheese, livid and relaxed discussions ensued among the throwers. The throwing demonstrations of Sergey Fedosenko left all present speechless, he reliably sticks the knife with one full turn from 11m, and the axe from 7m without turning. The special M1 knife from Russia was also a much sought-after item.

On Sunday, competitions started late, so there was opportunity to explore the region (departement

Seine-et-Marne), very rural with plenty of forest and small villages. Directly around the competition area were the horses, donkeys and goats kept by family Gagnon.

For the long distance competitions, an attentive silence fell over the area. The winners achieved 15.99m (knife) and 15/15.55m (axe). 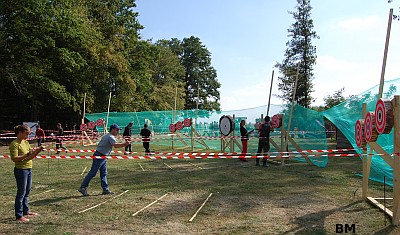 During the award ceremony, there were many happy throwers, also owing to the amazing cups that Dominique made for all first, second and third places. On top of this, Michel Dujay handed one of his

Basque throwing knives to the 4th ranked in the "knives long distance" event, and Mike Bainton awarded a Bowie knife to the overall winner.

Many participants took the opportunity to spend some days in the region or in nearby Paris. So, on Sunday afternoon most throwers cordially said goodbye, not without promising to return for next year's championship in the knife town of Maniago, Italy (21./22. of August 2010).

Again, many thanks and a big praise for the local organisers of the event, Bernadette and Dominique Gagnon, their family, the score-master Frank, the arbiters, helping hands, and kitchen-wizards!


"The friendship was very generous and helpful. Where we threw was lovely French countryside. The food was great. The sportsmanship was fantastic. We were blessed with good weather."

Benoît Mathellon, thank you very much for the photos marked by BM.

At the members meeting of the

FreeKnife became official members of the association. Also, it was decided that from next year on, the main event will be called "10th Big Throwers Meeting / European Championship". 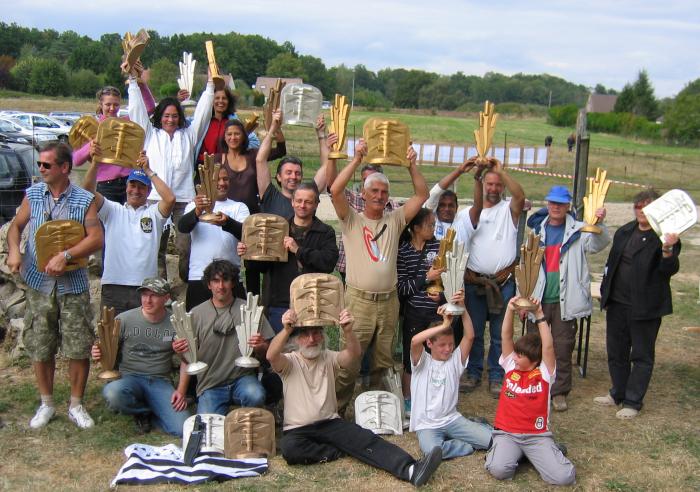 Victory photo with nearly all winners. Click for a bigger picture.

There was a record number of 71 participants, amongst them 11 women and 6 children.
There were throwers from 8 countries, participants in detail: Germany (10), Russia (7), Italy (4), UK (2), Switzerland/USA/Poland (1), the rest (and hence the majority) was from France.

The winners of each event are listed below. There is also a list summing up the results for all throwers, and the official spreadsheet with the detailed results and rankings.