Germany, southern Black Forest, near the French and the Swiss border. Winding roads lead the visitor through the mountains, until he reaches the small village of

Herrischried. Continuing by foot, he climbs up the path through high forest, and reaches a huge, sunny clearing. Around 20 targets stand there in a line, waiting for action.

This is the venue of the 11th Big European Throwers Meeting, and hence of the

EuroThrowers European Championship in Knife Throwing and Axe Throwing. 71 participants from 8 countries (CH, CZ, DE, FR, GB, IT, PL, RU), including 13 women, travelled as far as 3000km to compete. The training range is opened Friday afternoon, and soon there is a crowd busy honing their throwing skills. Occasionally, the sound of a missed throw echoes over the clearing. Many participants do combine the competition with a holiday, and are already in town since a few days.

Holger Wycisk of HWS events, kicks off the competitions on Saturday morning. The atmosphere is very relaxed, not least due to the elaborate organisation (freshly hewn targets, 15 arbiters with orange vests open to all questions, and food and drinks in a newly constructed open hall at the foot of the hill) and a weather fit for an emperor's crowning. During the competitions, training is still going on at the forest ranges, and those not throwing have a chat in the shadow of the tents (a common language is always found [hint: most often that's not English], and if not, some friendly translator speaks up).

After lunch, the world's strongest man,

Petr Filaretov from Samara shows how to fold nails into pieces of art, and how to break chains that were previously demonstrated to resist 6 men pulling at once. Two Russian clubs present hand-made guest gifts to the EuroThrowers: a throwing rose from СталкерЪ (Saint Petersburg, “We throw everything”), and an African throwing knife from Железный век (Samara). 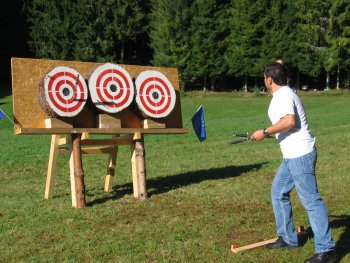 Long before dark, all competitors have finished all their disciplines. Obviously, not enforcing a special order for throwing (for example via starting numbers) speeds up the competition, and so does beginning the long distance events in parallel. The day ends down in the valley, with a barbecue buffet. Throwers and other guests gather round the fire baskets, chatting in mingling groups until late after midnight. The campers have the shortest way home, their tents are on the lawn just across the street.

On Sunday morning, the EuroThrowers Duel-Cup is held for the first time: the sportsmen (and a rather successful girl, Tanja) duel in pairs, the one who hits the target first after the signal goes to the next round (

details). The final round of the catching and exciting event sees Jiří Žižka (CZ) and Mickhail Sedyshev (RU) competing: their knives stick in the target at the same time, Mickhail wins because his knife is 0.5cm closer to the target. He walks away with the 200 Euros in price money, half of the accumulated duel-cup fees, with the other half going to the club. (As usual, to foster a friendly sporting spirit, no price money is awarded for any other event.)

In the afternoon, the

Open German Championship in Double Axe Throwing takes place on the premises, with some of the knife- and axe throwers also testing their skills in this sport.

During the award ceremony (ranking below), many a shining face is seen among the women and men receiving their medals. Some athletes appear multiple times in the victory photos, but altogether the winners are distributed among many countries.

New records have been achieved in 7 disciplines. Holger Wycisk also hands out handy gifts to the winners (sharpening stones, backpacks, flashlights), and as a small thank-you for all the organisation effort receives a Perfect Balance throwing knife from Christian Thiel.

managing committee is re-elected, and a decision is made that the Championship next year shall be held in Moscow (given that a few bureaucratic hurdles can be cleared this winter).

This Big European Throwers Meeting was a relaxed, very international and communicative event. The participants demonstrated that their sport throwing skills are on the highest level. Again many thanks to Holger Wycisk and his team for the perfect organisation!


* If there was a tie on the first three places of a discipline, the affected participants each threw 21 more times. The ranking for the first three was then determined according to the points achieved in the 21 extra throws (given in parentheses).

Out of the scope of the European Championship, the EuroThrowers duel-cup was held for the first time (