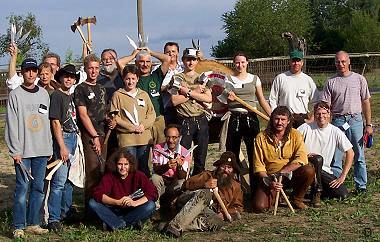 Fortunately, the hot summer had chosen this weekend to make a break, otherwise the third Throwers Meeting at the

Little Big Horse Ranch would have been quite sweaty. Being as it is, the event was held in perfect t-shirt conditions.
As usual, the first throwers from the south of Germany arrived on Friday. They could still see the color drying on the targets and of course try out the training target that had a generous backstop to catch missed throws. The camp fire was put out by rain, so the dinner sausages had to be eaten in the waterproof "saloon", where you could join in on throwing related discussions till late at night. The accommodations for the night were the brand new Indian round hut, the tent or the "living room in the hay". Throwers from farer away, like Michel Dujay from southern France, enjoyed the comfort of a nice hotel in town.
After the breakfast on Saturday, everybody started his training throws, and more and more throwers arrived, among them many faces familiar from previous meetings. Last preparations were made to get the competition targets ready, which were aligned in a semi-circle this year to make the area easier to overlook for the spectators. Philippe Catania and wife arrived from Corsica, so everybody had a chance to warm up his French and English.

After lunch, a goulash soup from the campfire, Christian Prestin explained the security rules and opened the competition. There was no special event for women this year, experiences from previous events show that they tend to throw better than men! The well proven order for the events remained unchanged: knives short, knives middle, axes short, axes middle, knives distance, axes distance. At each of the seven targets there was a referee and a secretary who were recruited among the non-throwing participants and competent spectators. This minimized the number of non-throwing helpers necessary. In the brakes you could abuse the training target, enjoy a coffee from the bar or go to the table of the jury to examine Dieters knives and the videos from our shop that were exposed there for sale.
Thanks to the organizers, all events passed without problems! The big thing were the distance events, where we had two new records this year. Holzfäller Jack just walked to the 16 meter line, threw and planted the axe in the target... The rest of the throwers could just struggle for the second and third place :-) At the following award ceremony, it was evident that some throwers were again in top places at multiple events. The day ended relaxed around the campfire with animated chats till late at night.

Sunday started gemütlich with breakfast and fun throwing, that is everybody could try out other knives/tools or crazy throwing styles. Quite some throwers sadly had to travel home already. Noon then saw an event very important for our sport: the foundation of the first European Throwing Club! Even though the negotiations had to be done with simultaneous translation German/French, the fourteen founding members could finally agree on name and statute, and the

European Throwing Club Flying Blades (Eurothrowers) came into existence! The goal of the club is to network axe- and knife throwers throughout Europe and to assist in organising events. Additionally, the public shall be informed about our sport.

Many thanks again to Christian Prestin and the whole team from the LBHR who organised this event! Next year, the torch is to be passed on, so that the Big Throwers Meeting can perhaps be held in another country.

Thanks to the hobby photographers for their pictures! A: Alleswerfer D: Michel Dujay

official list can be found at the LBHR. The results are also in the

terms/privacy
If you ❤️ KnifeThrowing.info, buy me a coffee
German: Werfertreffen LBHR 2003