Big European Throwers Meeting in Chomutov, Czech Republic, on the 20th of September 2008

Most participants brought the whole family, seeing the throwers meeting as an opportunity to pass their holidays in the Czech Republic. This eighth Big European Throwers Meeting of the European throwing club

Eurothrowers was organised by the Czech Celts Association and

NAJA. Both Czech clubs are holding throwing competitions since some years and also participated in international events. 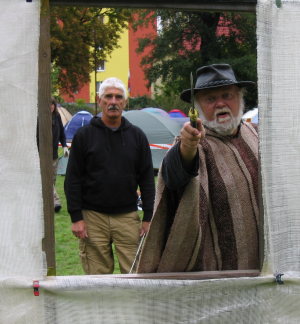 Forty throwers from 7 countries (Germany, France, Italy, Czech Republic, Slovakia, Poland, Finland) came to compete in the axe throwing and knife throwing events, to share their skills, and to have fun. The atmosphere had an international flair, and all announcements and registration forms were in two languages. Enough participants spoke multiple languages, so if you wanted to ask a thrower about his special knife or style, there was always somebody at hand able to translate. Everybody felt welcome at the event, and at subscription you even received a welcome package offered by the town of Chomutov.

Most of the 23 international competitors already arrived on Friday, most of them staying in the nearby

Cesky Dum hotel. The training targets at the competition area were already in heavy use throughout the day. In the evening, many throwers found together in the hotel restaurant, to make new friends and meet old acquaintances.

The competitions started a 9 o'clock in the morning on Saturday. Those who decided to sleep in the numerous tents on the competition site were woken up earlier by the sound of bouncing knives, with many throwers warming up at one of the many the training targets. After a brief introduction, the two competition targets were put to use. For each event (knife 3m, 5m, 7m, axe 4m and 7m), the throwers were called by name. The targets each consisted of three tree rounds, which had to be thrown at in a clockwise manner. As a regional specialty, you were only allowed to have one single knife, and had to retrieve it after every single throw. The points were taken by arbiters who had committed themselves to this task for the whole day. Due to time constraints, the axe events were done in parallel on a different target, with only 5 throws per event. As special treat, the organisers had set up the windows-event: a window-frame was place 4m before the target, and you had to throw through it. The body was not allowed to lean through the windows, and starting from the 6m distance, everybody had to kneel when throwing, so as not to hit the frame.

Lunch was served in the club restaurant, and thanks to the sponsors, was even included in the low registration fee. Two shifts were formed, so that the throwing activity could continue without disruption. In the afternoon, the winners of the separate children's contest were awarded their prices: a chocolate cake and plush animals. 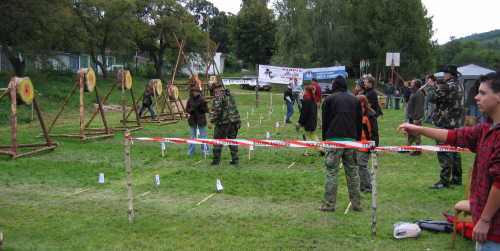 As always, the long distance event was what really wowed the audience, and "Krokodyl" made it by sticking his small axe from the distance of 26.2m. Everybody became hungry in the evening, so a sausage competition was set up. On the target, a string was fixed horizontally that ran across the center, carrying a sausage on one end. You cut the line, the sausage drops (onto cardboard), and you may eat. The throwers were very concentrated again, and joking abounded. If you missed, you just went to the end of the cue, and in the end nobody went away hungry.

Once the winner certificates were ready, it was already pitch dark and the awarding ceremony had to be held using spot lights. First, the women received their trophies and certificates, then the males. Beforehand, some duels were necessary because contestants had the same point score.

The day ended in a warm atmosphere with everybody getting together in the club restaurant. Also, chaired by the EuroThrowers club, official throwing sport representatives from 4 countries met in an adjoining room, to negotiate and finally agree on common

I would like to thank the hosts, especially Josef Svec and Ludvik Smajda of the Celts and Fery and Lada of NAJA, for their smooth organisation, which ensured that all guests felt welcome. We will fondly remember this event, and surely come to the Kacice meeting in may 2009.

A detailed list with names and points achieved is available in HTML and PDF-format. In some events there was a tie, so we had to hold point-duels (see detailed list). 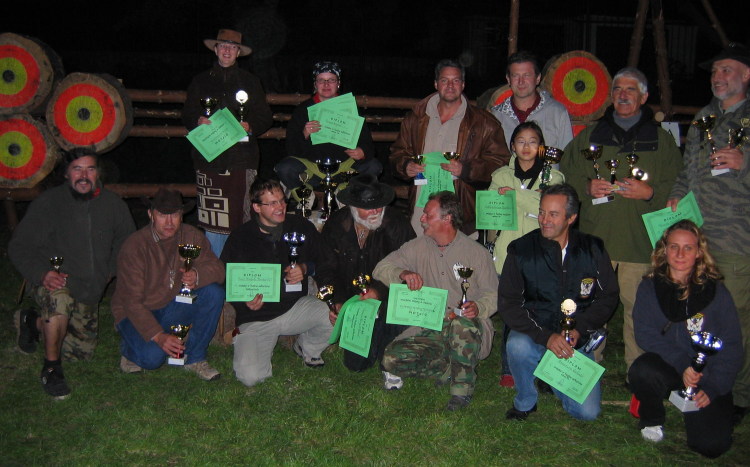 Photo of all adult winners (well, nearly all).

Rules for this event

This were the competition rules employed. Note that they are a mixture of the established rules and Czech specialties. Also, some aspects had to be changed on site due to time constraints. Our standard rules are also under construction right now, to negotiate an European standard.

Throws: 21 at each distance; Only 5 throws in axe events due to time problems. You are only allowed to throw with one single tool, which has to be retrieved after every throw!


Long Distance - both knives and axes
You start at the distance you choose.
You have three throws at each distance.
Hit of any target counts.
The distance counts in cm, for example 13.48m.
If there are throws of the same distance - there will be more throws on this level (sudden death).

Throwing implements allowed: any knife with one point; Axes with one blade, breadth between the points max. 10cm.

It is not possible to change knives and axes during an event (e.g. 3m). Only in case of damage of your throwing device.

Knives will not be straightened to 90° angle to the target before scoring. If two rings are touched, the higher counts.

The counting point with axes is the middle of that part of the blade that sticks in the target.

If two rings are touched, the higher counts.

The referee is always right. If you don't observe the rules, especially those meant for security, you will be sent off the place.

Participants under the age of 18 must be accompanied by their parent. Separate scoring for children/youngsters, men and women.

terms/privacy
If you ❤️ KnifeThrowing.info, buy me a coffee
German: Werfertreffen Chomutov 2008