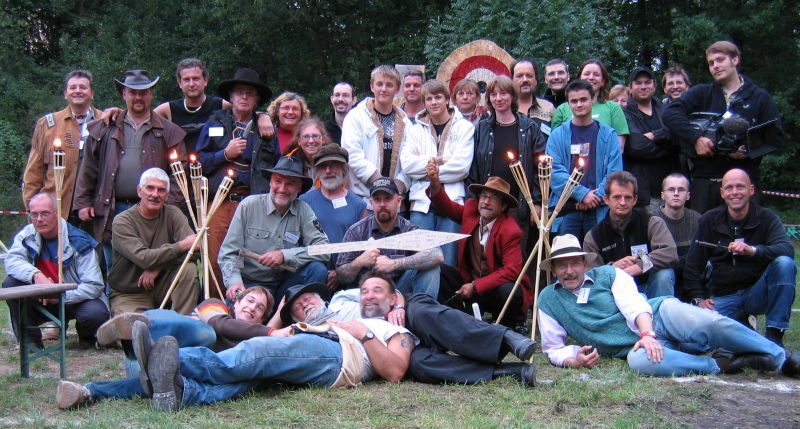 European Throwing Club "Flying Blades" invited to a fun and competitive weekend in Erlangen, Germany. It was already the 7th Big European Throwers Meeting, the local organiser this year was Norbert Maier. Knife throwers and axe throwers from 5 different countries (Germany/France/Finland/Czech Republic/Poland) came with their families to compete and chat.

The location, a clearing in the Meil forest which used to be a shooting range decades ago, was a nicely remote area, but close enough to civilisation (here, a rural restaurant). Many participants slept in their tents right on site, the rest were all staying in the hotel Mercure. This year, only 3 targets were set up, but each was constructed out of 3 tree-rounds. As there was enough safety-space between the targets, they could be used independently. Thus, each thrower chose one target per event, and had to throw at each of the three rounds in alternation. The arbiters were all provided by the organisers; They stayed at one target and could well concentrate on checking that the rules were adhered to. Whoever felt ready to throw, cued up at one of the targets. The individual events could be spread over the whole day, and many throwers took the opportunity to give their arms some rest before doing the longer distances. This form of organisation proved to be very time-efficient. Despite a generous lunch break in the restaurant (with traditional Franconian food), in the evening all throwers had finished the events, and there were quite a few! 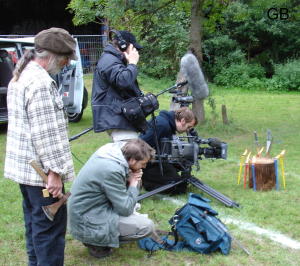 In addition to the usual events knife 3m and 5m and axe 4m and 7m, we had the competition knife 7m. Here, strong arms and a professional throwing level were needed for sure. Long distance throws with knives and axes were also scheduled, here we had to hold some play-offs before the prices could be awarded. For the very first time, the event Throwing-While-Running was held. The task was to run-walk past the target in a distance of at least 3m and throw at it while still moving. This is actually more difficult than you would guess!

With so many international participants, it became clear that the rules have to be fixed and published in detail beforehand, and then adhered to strictly. The communication via English (which was not the mother tongue of anyone present) respectively hands and feet is challenging enough as it is, albeit fun.

Due to the dry weather and the asynchronous organisation of the throws, the competition was completed well in time. The gentlemen and ladies from the arbiter yurt printed the results, and Norbert announced the winners. Before handing over the numerous trophies and certificates, we had to have some duelling play-offs as there was a tie in multiple events. Until late in the night, we sat together around the campfire and shared drinks and stories. The grilled meat came in very handy after a hard day's throwing. 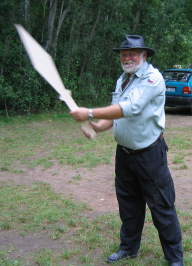 During the whole weekend, a TV camera team was on site, as a report on the event will be aired by the infotainment magazine "Galileo" (German national TV chain Pro7, from US-owned

ProSiebenSat.1 Media AG; You can

view the rather lurid TV report.). The normal events were not so much their focal point but a special "nationality competition" with selected throwers, and an additional we-throw-everything event. For most of the time, the team was very unobtrusive, only at the beginning some ad-hoc person and plan changes produced some unrest. On Sunday, a special high-speed camera was brought in, to hopefully settle once and for all the question of how fast a thrown knife flies.

Parallel to this, there was of course quite some fun-throwing going on on Sunday. Many throwers sadly had to leave soon. As scheduled, the biannual members meeting of the

club was held, with very constructive discussions in French and German. The most recent piece of news was a club insurance against injuries. After the report on their activities, the executive committee (

Christian Thiel, Philippe Catania) was re-elected for another two years. And finally, a more modern version of the club logo was approved unanimously.

Afterwards, only a few throwers were still on the premises. But the French group stayed as a whole, to throw some more, help to tidy the place, and to conduct a touristic exploration of the Nürnberg area. Many thanks are due to all throwers who traveled so far to compete and contribute to the friendly international atmosphere of the weekend. I have also to express gratitude to Norbert Maier and his numerous helping hands, who handled the extensive local organisational arrangements.

That were the rules:

Comment: The rules at this contest had quite some experimental elements. The discipline Knife-Running was convincing, for the rest we will stay with the established rules.