For the second time, we had a thrower meeting in the wild west theme park

Pullman City in the Bavarian Forest, Germany. During the weekend of the 7th-9th of October knife throwers and axe throwers met to compete and have fun. Having been declared as the Big Throwers Meeting and hence the central event of the European throwing community, the international participation was high. There German participants were outnumbered by those from France and even two from Finland, the average thrower traveled 870km to get here (for you Americans: in Europe, this is quite some distance!)

Friday was as usual intended for the people to arrive on site and settle down. Despite problems with changed flights all international guests were brought on site till the evening. Most throwers slept in the nearby

hotel Passauer Hof, some set up their tent for free at the theme park (perhaps the better choice: "It's simply fabulous to have breakfast in front of your tent in the morning sun and then do some test throws, right beside a snorting bison herd browsing the grass."). After a short inspection of the competition targets, we ended the evening in the saloon, with a live band and rodeo videos.

On Saturday the competitions started (later than scheduled) at 11 o'clock. The competition ground was again a pasture, something which had proven to be nearly perfect for our kind of event during the last years, due to the amount of space it provides and the barriers being naturally in place already. Attracted by advertisement in the theme park, quite some interested spectators came to look, all being very safety-aware and respecting the safety regulations. After doing some trial throws, some spectators where "hooked" and promised to train and come back next year.
There were 5 targets reserved for the competition, into which each thrower would have 4 throws per event (totalling 20 throws/event, with an extra 5th training throw per target). Compared with the 7 targets we had in previous events, this setting was much easier to overlook for the main arbiter, reducing the waiting times during the competition. The points were taken down by 5 arbiters on the personal sheets of the throwers. As usual, these arbiters were participants who would in the next round switch places with the people just throwing. Many throwers liked that the release of the throws was given orally and not using a whistle. Before lunch, we completed the events knives 3m and 5m, after a meal in one of the food stalls in the theme park, the axe 4m and 7m events were held. The change of the distance markers on the ground, colored plastic barrier bands fixed with iron rods, was accomplished in nearly no time. But despite that, the sun was already near the horizon when the last 5 throwers had hurled their axes, and the distance events had to be postponed till the next day.
Nearly all participants had dinner at the hotel, where we sat together till late in the night, discussing and making friends. The hotel musician contributed to the cultural education of the guests with a round of "schunkeln". 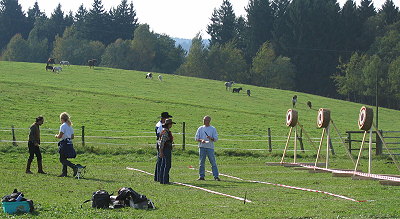 Eurothrowers). The meeting took 1½ hours and was held in three languages (E/F/D), some members who could not make it this weekend had transferred their votes to participating persons. After a review of the work done so far, the managing committee (Maier, Thiel, Catania) was reelected unanimously, then, among other things, the focus of future work (weapon laws in Europe) was decided.
Afterwards, everybody proceeded quickly to Pullman City, where the distance event knives was held. Unfortunately there was no time for the axe one, as we staged a show for the visitors of the theme park half past noon in the riding hall: after a short introduction into the sport and a mock competition, the throwers demonstrated with much enthusiasm their skills at the big wooden target wall. A highlight was a knife that was thrown so that it stuck in the handle of the previous one (

picture)! In the following session, interested spectators were shown the basic throwing technique and could do some trial throws. This offer was taken up so enthusiastically that one of the targets broke down in the process. After a late lunch, many participants had to travel home already, so that not all could receive their winners certificates and prices (3 Professional Throwing Knife replicas produced and donated by Dieter Führer, 1 TFT thrower donated by me) in person later in the awarding ceremony.


Many thanks to the management of Pullman City, who provided the location and the targets, and to the participants (esp. Michael and Claude) who assisted me as arbiters and in organisational matters!

I think that everybody had much fun at this event, and chances are good that I can organise it again next year.

terms/privacy
If you ❤️ KnifeThrowing.info, buy me a coffee
German: Werfertreffen Pullman City 2005