This year, the Big Throwers Meeting took place in the French alps near Grenoble. As promised, Christian Buttarello invited knife throwers and axe throwers from all over Europe to his small town of Allevard near Grenoble in France. Right across the street of his bar "Géronimo" the throwing area was prepared.

Many throwers arrived already on Thursday, so that in the evening we were 20 people together enjoying the evening, company and food in a newly opened restaurant above the park. Friday morning, people started to train at the throwing area: on the free place, two wooden walls had been erected at opposite ends (much work for Christian B. and Dominique). On each of them, 6-8 target made from tree rounds had been securely mounted with screws. All were placed at the same height, so it was not necessary to rotate during the competition. Some little tree rounds at each wall and one in the background (which could be used even during contest for training) provided ample opportunity to throw at, and ample backup in case some of the targets would be destroyed during the competition. The floor directly in front of the targets was covered by wood, as to prevent damage to the knives, and to the sides and top of each wall planks were fitted to catch astray rebounds.

The contests started on time Saturday morning at 9 o'clock. The spectators had taken seats on the terrace of the bar or stood watching at the fence, especially the locals who came by out of curiosity. Until the evening, the events knives 3m, 5m and 7m and axes 4m, 7m and long distance were carried out. The only interruption was for lunch, local specialties (polenta, sausages) prepared on site by a cook, who had taken the day off for this occasion. Thank you again for stopping loud kitchen work whenever competition throws were due! During the contest, the main arbiters (Michel Dujay, Gérard Lecoeur, Philippe Catania, Claude Neufsel) took turns in watching over the safety and giving the throwing orders (in French only, like most of the announcements). As usual, the points were taken down by currently not-throwing competitors. The two participating female throwers did well with their axes and knives. The highlight of the evening was a concert by the coverband

Angus le Jeune, and the night ended with dancing, chatting and foosball.

With 134 registrations and 30 competitors, the contest was very well attended. Slightly more than half of the throwers were from France, the rest from Germany, Switzerland and, for the first time, from Italy. Having traveled from Rome, Americo Sabato, the president of an Italian knife throwing association

ALSI, agreed with the managing committee of our European Throwing Club

Eurothrowers on an informal collaboration.

Sunday saw the event knives long distance before the eyes of supportive spectators. Then, the winners were awarded certificates and could chose among the prices donated by Christian Buttarello, Gérard Lecoeur and Christian Thiel. Now finally the place was open for pure fun throwing, and the competitors took the opportunity to try out different knife and axe models from fellow throwers. Many members of the local public took the courage to get some throwing lessons. Michel was busy with his machine, engraving knives. In the afternoon, the very favorable weather (caps were a good idea against the sun) turned to rain, and the meeting fell apart. Christian Buttarello invited the remaining throwers to a crèperie, where we passed a very nice evening. I stayed in town for some days to do some hiking on the well-marked paths in the mountains.

Again many thanks to Christian Buttarello for making possible this meeting at his place, and for the heartily welcome. And also thanks to Claude and Gérard who helped with the organisation and promotion in France.

I had very much fun throwing and joking during these days, meeting many familiar faces. If next year (or in 2008) there is again a meeting in Grenoble, I will be there. 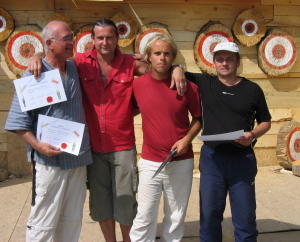 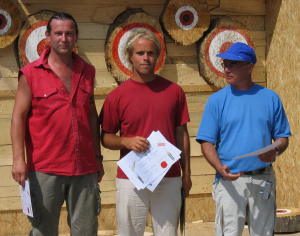 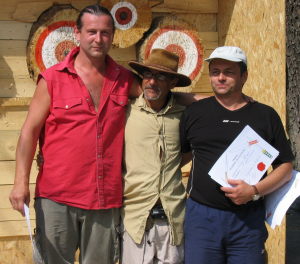 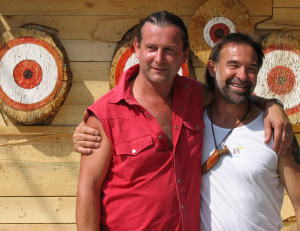 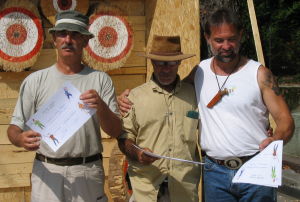 The rules were as follows:

terms/privacy
If you ❤️ KnifeThrowing.info, buy me a coffee
German: Werfertreffen Grenoble 2006