Pages of the designer John Bailey 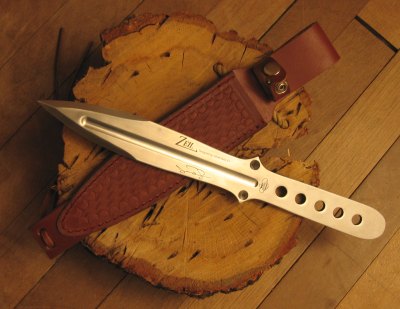 The new "Ziel 2" throwing knife by John Bailey has a very appealing design, likewise the included sturdy leather sheath with its embossment. Gripping the 333g knife gives you a comfortable feeling, like you knew this throwing knife already well. This is perhaps due to its balance (nearly center. The overall length of the knife is 33.3cm.

The blade is not sharpened, so gripping it is possible. Using the hammer grip on the handle, I stick it from a distance of 3m with a full turn. Placing the thumb on the spine (which slows the knife's release), I need 4.1m. This already shows that the handle (especially is length) is well suited to influence the throw using different grips, similar to the Dragon Knife. If you want, you can snuggle your thumb against the protruding diamonds, giving you the same comfortable grip in every throw.

The rather thick (5mm) throwing knife flattens to a thin tip, allowing for good entry into the target wood. For just 24 Dollars (2007), this knife (produced in China by

Böker) is really a bargain. Because of its weight it is especially interesting for professional throwers.

Beginning in 2012, numerous knife throwers reported that the tips of their freshly delivered "Ziel 2" throwing knife broke off after some throws.

Until the end of 2007, the previous version of this knife (see photo) was sold. It had the imprint "Zeil" due to a spelling error. Even though it sported real holes in the handle in contrast to the indentations with the new model, it was considerably heavier (364g). Being sharp, a blade grip was not possible. But, the overall manufacturing quality of the original version made a much better impression than with the new "Ziel 2".

The Mini Ziel throwing knife has been introduced in 2011. It sports a length of 22.7cm and a weight of 191g. Thus, it is definitely a rather light throwing implement. The blade is constructed to be blunt, so that the knife can be easily gripped either by the handle or the blade. In both cases, using the hammer grip, you can rest your thumb in the dent on the spine. The tip is very sturdy, albeit a little asymmetrical.

"Ziel" is German for "target".

terms/privacy
If you ❤️ KnifeThrowing.info, buy me a coffee
German: "Ziel" Wurfmesser