This article is destined to describe the application of my hand-to-hand-fight wave technique to the battle-suited throwing of knives, screwdrivers and the like.

In the frame of this article I won't touch all the details of my wave method. But some remarks surely have to be made. So, why the "wave"? Historically, traditional Russian martial arts include slash punches, sometimes with an open palm, which clearly use the energy of the wave.

The origins possibly lie in the usage of the whip in horse riding or lashing in traditional punishments. Both inherently have "flicks" at the moment of the junction of two waves. Similar wave and circular hand and leg movements with the same "flicks" at the end roamed into the martial arts. I have reformed and brought them into my Fedin Fight System.

Returning to knife throwing I would like to start with a half-turn mode that is easy to learn in self-dependent training and uses the effect at two waves' junction.

Let me start with the knives I use for this mode. So called "traditional" long and heavy knives for throwing are prohibited by Russian law. Therefore Russian throwers use other kinds of ordinary house knives. The two examples on the photo are named (from left to right) Vjatich and Osetr. Although they look different, both knives have some common features which make them suited for the throwing mode to be explained below. First of all they are only sharpened on one side. Secondly, their center of gravity is not in the middle but towards the handle. The first feature allows for the same kind of grip (see photo) in which the forefinger is pressed to the blunt side of the knife. The second feature stipulates that a grip from the blade side is preferable. This is not necessary but in case of a grip at the handle the knife will rotate faster, reducing the battle distance. And last but not least, the knives are reasonably short to be carried. 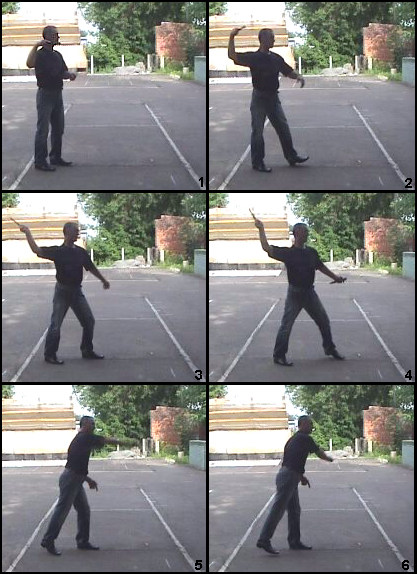 The big photo sequence shows the basic form of the wave throw movement. Being put in brief, the limp arm makes a slash in the vertical plane as if it had a whip in the hand. The action starts with the elbow smoothly shifting into the backward-up direction, which creates the first wave. At this moment the forefinger should point to the target. The elbow pulls the hand with the forward-pointing finger backwards until its physical limit. Afterwards the limp forearm continues moving backwards with the hand turning until the forefinger points into the direction opposite to the target. As the forearm moves smoothly backwards the elbow starts a return movement which is much faster than the initial one. This slash creates the second wave. It is necessary to balance the smooth backwards and fast returning elbow movements, so as to feel the second wave overtaking the first one to create a flick not in a whip but in the arm itself. This effect of two waves' conjunction should have place on the tip of the forefinger at the moment the hand passes the ear on its return way towards the target. Together with the flick the knife should leave the hand in almost vertical state, the handle pointing upwards. It is important to make the throw when the hand is as close to the ear as possible. In case the throw is made too late, when the hand has already passed the ear towards the target, the knife won't receive enough energy and will start rotating much faster as well.

The described kind of wave knife throw provides enough energy potential to strike the target with the above knives from a distance of 4-5 meters. The knife makes only a half turn or, to be more correct, three fourth of a turn as it leaves the forefinger when it is pointing nearly vertically to the sky. Leaving the grip the knife flies with its handle pointing forwards for at least half of the distance. Then it makes a quick half turn just in front of the target. There are three reasons for that sort of flight: a center of gravity towards the handle, powerful initial impulse caused by the waves' conjunction, and the forefinger sliding off the blunt spine of the knife. The latter also slows its rotation and provides accuracy. (Note: Watch for notches on the blunt side of the knife, take care of your forefinger.)

The photo sequence below shows the addition of the chest muscles' potential to the described wave hand movement, which permits to stretch the half turn distance with the same knives to up to 7-10 meters. With the help of some secrets I manage to prolong it to up to 12-15 meters. So, you can clearly see that such a mode of knife throwing is quite flexible in battle situations. You just need to get used to the feeling of your knife. Variations of throw impulse and chest muscles' addition, if needed, give the possibility to strike the target in the range of distances between 3 and 15 meters without the need to count turns. For distances up to 3 meters just take the knife by the handle with the same grip and repeat the same wave movement.

Sequence illustrating how to incorporate the chest muscles into the throwing movement.

With this instructional article I would like to draw attention to the perspectives of wave movements in martial arts. The potential is really strong. In order to initiate some interest I would also like to mention that I have found a way to effect real no turn throws (the knife flies like an arrow), side throws, down throws and throws behind the back as a further development of my wave system. I will be glad to receive any comments as well as to meet in Moscow and abroad with those who are interested in learning my system.

Translation from Russian into English by Yury Ershov, a student of Fedin's.