Report on the 4. Big Throwers Meeting near Bayonne in France from 1.-3. October 2004

The event near Bayonne in southern France was most likely the biggest gathering of knife and axe throwers in Europe so far. Around 30 throwers from different countries (mainly France, but also Germany, Switzerland and Spain) took part in the contests. Michel Dujay, author of the video "Le lancer de couteaux", arranged the competition on the first weekend of October 2004 at the shore of the nice lake of Sames near Bayonne.

On Friday morning, Michel, Gérard Lecoeur (author of the book "Le couteau de lancer") and I arrived at the idyllic site and began to set up the targets. Soon, the first participants showed up and helped, for example by wiring the stilts of the targets together to make them more stable. In the evening, most throwers had arrived. Those coming by plane or train were fetched from their points of arrival by a shuttle-service. Some participants rented one of the bungalows on site for the weekend, the younger ones preferred to stay in the tent colony that developed near the targets. But nearly everybody took the opportunity to eat in the excellent French restaurant on site. 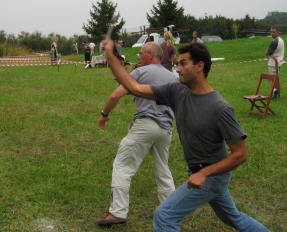 On Saturday morning, late risers had no chance but were shaken awake by the sound of knives being thrown at the training targets, which were pretty much in use. At 11 o'clock the contest targets were released. After an inscription phase and the explanation of the rules the constests started. One participant was assigned to each target as arbiter. In each round, the competing throwers would throw 1+3 times at one target and then rotate to the next one, until they had thrown at a total of 7 targets. The main arbiter had a good view of the area and signalled every throw with his whistle. Until lunch, the knife events 3m and 5m were completed, with a record participation of 29 throwers for the short distance! The afternoon started with half an hour show throwing for the television team that showed up. Afterwards, the axe events unfolded. The distance events were held in the evening, just before nightfall. The price awarding ceremony was then held in the light of car lights: The first three throwers in each event received certificates and a local schnaps, throwing knife or one of the above mentioned books or videos. Despite never having thrown in competitions, the French participants achieved very good placements. During the following dinner in a especially erected tent hall, there was ample opportunity to again discuss the results, throwing techniques and tools and make or renew acquaintances. Midnight saw a vivid discussion about the future of the

European Throwing Club Eurothrowers, who gained quite some new members at the weekend. 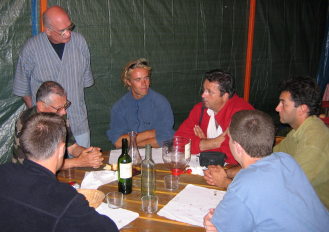 The Sunday started very gemütlich, many throwers had to catch some sleep. Then some took upon them the task to dismantle the targets (at least those that were not destroyed by the huge Swiss axes :-) Some lucky people who had a car at hand could take targets home for a few Euros. Before lunch, there was a short, unofficial meeting of the Eurothrowers club, where the new members presented their ideas and wishes. The rest of the day was pretty much dedicated to have fun throwing at the remaining targets.

All in all, the Big Throwers Meeting 2004 near Bayonne was a huge success. The record number of participants testifies to the continuing and rising interest in the sport. A whole weekend, throwers had the opportunity to talk about throwing techniques and learn some new tricks. The meeting brought together the throwers in France for a first time, who now begin to perceive themselves as a group. The Eurothrowers club will help to keep the communication between them (and the German throwers, of course) going. Again many thanks to Michel Dujay, who organised the meeting and made it a success!
Christian Thiel

This were the contest rules:

terms/privacy
If you ❤️ KnifeThrowing.info, buy me a coffee
German: Werfertreffen Bayonne 2004