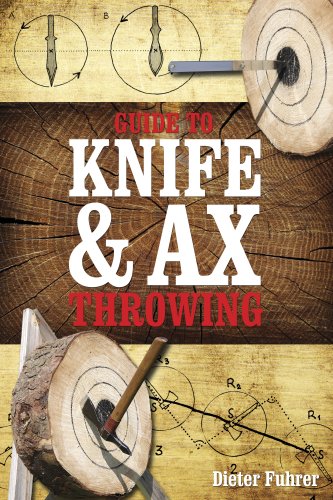 Summary: Beginners will find a very easy to follow and comprehensive introduction to knife throwing and axe throwing. Seasoned throwers will value the book as reference for some advanced topics.

The author, Dieter Führer, is uniquely positioned to teach you about knife throwing: As an internationally trained paratrooper during the Cold War years, he learned the basics. Decades later, after retiring from his job as geography teacher, he took up throwing as a serious hobby, and for ten years won medals at just about every international knife throwing competition in Europe. That was when he decided to compile his experience into a book (first edition in German*1).

The reader is led to the first knife throws and sticks very quickly. It's only after the first practice throws that things like grip variants and knife types are explained. All important knife throwing topics are presented in an easy to understand - sometimes compact - manner. The same goes for the last third of the book, which covers axe throwing.

The physics background given is in my opinion erroneous*2 and should better be read at the physics section or my site. But this is not a big issue, since all the practical consequences, for example of using a different knife grip, are described correctly.

A healthy scepticism against knives and axes that are made to look cool, and not to throw and stick well, shows throughout the book.

My advise for beginners would be to start from a distance of 3m, using the hammer grip, thumb on the side. If you start at 1.5m, as suggested by the author (throwing without much rotation), you risk that you can't dodge rebounding knives in time - and especially beginners must expect that their knives will bounce back at them from the target.

All in all, this is a very good handbook on knife throwing and axe throwing, with illustrations that are both great to look at and to the point. If advanced throwers find a topic that's only briefly touched upon in the book, well, they can read up on the details here at KnifeThrowing.info.

*1 The native edition, published in 2011 in Germany, has the title of

Handbuch Messer- und Axtwerfen (review). The translation to English was not accomplished by a knife thrower, thus it is not as smooth and precise as the original version. It is a nice touch that in addition to centimetres and grams, measurements are also given in inches and ounces.

*2 About some of the wrong statements on the physics of throwing:
p. 41: For long distances, a knife that is not centre-balanced is claimed to be "even more advantageous, because the knives rotates fewer times over the same distance."
This is wrong, as the knife will have the same angular velocity as a centre-balanced one, and hence will fly exactly the same distance per rotation. There might be a minimal slowdown of the rotation, because knives balanced off-centre will be gripped at the light end, and thus the radius of the throw (shoulder - centre of gravity of the knife) is increased by some centimetres.
p 32: A thumb on the spine of the knife is claimed to slow down the rotation of the knife, because "a small torque is added by means of the slight pressure applied by your thumb on the blade's back."
This, too, is a misconception. The knife will indeed reach the target with fewer rotations. But this is because the knife will leave the hand later in the throw, and hence closer to the target. The angular rotation velocity remains the same. You can verify this using the distance table on p. 34 of the book, starting at 3m, where the distance for one more full turn of the knife is 2m - for both the "slow rotation" and "fast rotation" throws!

You may wonder why the title of the book is written using "Axe", where all the online sources employ "Ax"? The answer is, the paper copy of the book I bought has indeed "Axe" on the cover and in the imprint.