Clyde Hoch from the Accuflight company could not make traditional throwing knives stick. Thus he developed this device that looks like an oversized dart arrow. It has the big advantage that it nearly always sticks in the target, perfect for the beginner who wants instant success. But if you want to seriously learn how to throw knives, the Easy-Stik is no good, as normal knives do require a completely different throwing technique.

Again, if you just want to play around, this throwing device is perfect in that it can be thrown in many different ways, for example: 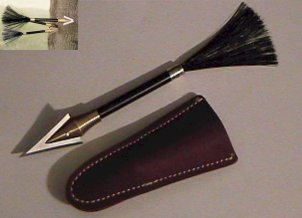 The knife is especially suited for indoor throwing, as it will even stick when thrown slow and without much force.

The blade is made of stainless steel and comes very sharp. It becomes a little blunt by and by, but still remains sharp enough to stick. If you want, you can always sharpen it with a file. If the blade should brake, for example after being thrown full force against a concrete wall, you can order replacement from the manufacturer.

After some throws, the blade gets a little play in its brass mounting, but that poses no problem for the throwing. The tail should be bend towards the blade sometimes, that makes it more voluminous and increases its ability to stabilize the flight. The tail as well as the shaft made from polycarbonate seem to be pretty indestructible. The leather sheath protects you from the sharp blade, but I guess it will fall apart sometime. At some places, you will have to pay extra for the sheath.

Unfortunately, the manufacturer has ceased producing the Easy-Stik Pro.