KNIFE THROW AS OBSERVED FROM ABOVE / FRONT

The knife swing begins from behind the body. As the knife is brought overhead and forward the elbow begins to align itself with the target. The elbow stops (see 3rd frame) as the knife is released at the top of the swing. At the moment of release the forearm is perpendicular to the ground. After release the forearm continues to straighten forward toward the target. Finally the entire arm is brought straight downward toward the ground (not across the body). The final photo shows the release point of the knife, i.e., the hand slides off the knife when it is perpendicular to the ground or at the apex of its swing. 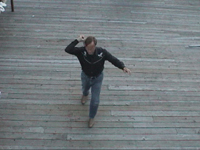 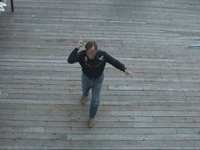 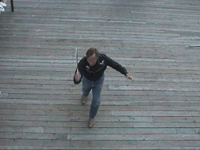 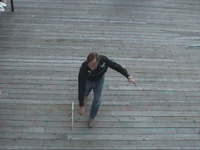 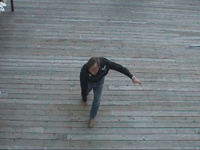 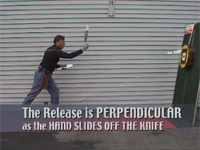