As competitor, you got the feeling of being inside a stadium: The competition grounds of the World Championship in Knife Throwing and Axe Throwing that took place August 20-30 2015 in Huthwaite / Nottinghamshire / England were arranged in the form of an U. The visitors – friends and family of the local throwers - would wander into the open side of the U to watch and cheer. And you were walking on tight British lawn – which just shrugged off the two showers that had the potential to create a mud pit. But please forget your image of the reserved Brit – the local organisers from the club

KATTA UK and all their helpers very very welcoming and cordial.

The World Championship was the biggest gathering of knife throwers and axe throwers that the UK has ever seen in modern times: 133 athletes from 12 countries participated, eight countries were present with teams of five and more throwers. For the USA, it was the first year to make it into the country ranking, debuting on rank 5, with just 5 points more than follower Russia. To organise such a pluri-lingual crowd, the announcements were in four languages - Little John himself didn't have to use the amplifier for his booming voice. 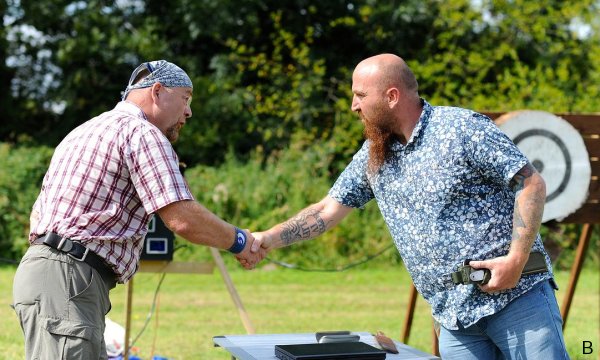 The tone among the participants was cordial as usual, the language chaos just added to the atmosphere. To my estimate, 70 throwing knives changed hands during the event – 30 of them Russian throwing knives brought in from Moscow, so that the thrower community can already train should there be a Championship in Russia one day (bringing your own knives through the customs there is not possible with legal certainty). The rest of the knives were given away by participants – from some so generously that they had to borrow some knives back for their competition throws. The social highlight was the get-together Saturday evening, with pork and apple sauce, live music, fire performance and bonfires. The

gemütliche gathering lasted well past midnight, with people drifting from one chatting group to the next.

The Championship took place on the

Woodend Farm Complex, a dog pension with shooting ranges and a beautiful fishing pond area – created 40 years ago by the family of host Dan Mosley. His wife doled out the bacon-and-eggs and burgers personally from the food wagon, and the quiet food area was a welcome place to regain your balance for the next competition. The training targets on a separate area were well in use, this was the place to inspect knives and throwing styles, and chat with other throwers. (I got the chance to finally try out the SOG axe with short handles – they didn't work for my throwing style.)

The competition events were already well established – even Championship mode with all the distances thrown in one go was already routine after its introduction in 2014. The silhouette to frame with knives was of course a Robin Hood archer. The duel cup rolled along smoothly: Whose knife was quicker in the target in this 1:1 knockout tournament was decided by electronic measuring devices based on sensor reading from the targets. The Big European Throwers Meeting is striving to take up the best ideas from all over Europe – so it was no surprise that the duel measuring devices came from different inventors from different countries (Mark Bond UK, Walter Steinbeck DE, José Louarn FR). In the speed throwing event, Sergey Fedosenko stuck again 28 knives in 20 seconds – 10 knives more than the runner-up!

The World Championship in Knife and Axe Throwing was a success all around. The athletes were delighted by the cordial, relaxed atmosphere, the extensive event grounds, and varied events. Many thanks to John Taylor, Dan Mosley, Richard Sunderland and all the other helping hands from KATTA UK for holding this World Championship!

Rosanna Beltracchi, thank you for the fair play photo (marked B), and thanks to

Martin and Sarah Hainsworth for the big panorama group photo linked from the group photo.

News from the EuroThrowers association

17 member clubs) has the concern of making sure that there is a common Championship each year, and negotiates standard rules for it. The organisation of a Championship is always accomplished by a local club – this year it was hold by KATTA UK. The EuroThrowers assist in planning, and care for the international promotion of the event.

The biggest issue discussed at the members meeting held Thursday afternoon was the question if the European Championship shall be held in St. Petersburg next year. For that the central question was if enough throwers would want to travel there, given that you can't bring your own knives through the Russian customs with absolute legal certainty. To get a glimpse on what the EuroThrowers do, have a look at the annual report presented.

This is the newly elected 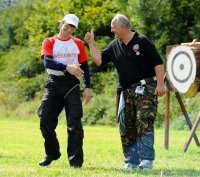 A big Thank You to all the people that made this World Championship possible!

Host Dan Mosley, the organisers Little John Taylor and Richard Sunderland and all the team from KATTA UK that was ready to help whenever a hand was needed.

Earnshaws, Wakefield , for the targets.
Alex Hancock at Western Power Distribution for the target frame wood.
Alan Lawson and Jayson Smith at Trentside Fixings for the screws and more.
Hire Station at Huthwaite.
Mick Leavers at Cast project.
Joe Darrah for the championship knives.
Special thanks to Helen from Hels Kitchen for the catering.
Dels Diner and helpers.
The band

Sea Monster Eyes.
Simon Ratzker and Mark Bond for the

Rules for the 2015 Championship

We always employ the

available in 7 languages), which means we will do the following events:

As a novelty addition in preparation for the World Championship events, we will include:

For each event, the thrower has to show up with a set of three throwing tools (knives/axes), of uniform shape and material (same "model"). Exceptions only for throwing tools damaged during the meeting.

The combined precision rankings are the basis for the qualifications for World Championship Precision, and the ranking of countries. There are no other rankings that combine several events.

Example for download: Combined ranking based on the results of Nivnice 2013, in comparison with a simple summation (comparison provided by Alexander Martynov): Excel file

The final in the Long Distance event will be held separately. Throwers that qualified by reaching the set distance (see above) will start with three test throws (to be effectuated between 4m and 10.99m for knives and between 5m and 12.99m for axes), before the event resumes following the standard rules (minimum starting distance 11m for knives, 13m for axes).

As usual, the Duel Cup will also be held. Pairwise throwing, the participant who hits the target faster after the signal goes on to the next round. An electronic system will determine which thrower sticks it first!

Duel Cup rules have not changed since last year (only editorial clarifications to the text).

This year, the distances achieved in the long distance events were included in the score for the country ranking.

Put as many knives in the target as you can in 20 seconds. Distance minimum 3m.
Detailed speed throwing rules: PDF / OpenOffice.

Knife throwing into targets that are grouped around a silhouette. Hits inside the silhouette will cost you a penalty of minus 10 points. Distance minimum 3m.
Detailed silhouette throwing rules: PDF / OpenOffice.

Because of time constraints (and rain), the following events could not take place:

A fusion of Snooker and Knife Throwing. The target consists of coloured circles ("balls"), and you have to announce the balls or play them into a certain order. Distance minimum 3m.
Detailed SNIFE throwing rules: PDF / OpenOffice.

For some events, we did not make a cut off for finals, which sped things up. For future championships, it is recommended to use finals only for events that draw a large crowd of spectators.

terms/privacy
If you ❤️ KnifeThrowing.info, buy me a coffee
German: Weltmeisterschaft im Messerwerfen 2015