St. Roman is situated in Austria, but only 20km from Passau in Germany, and also near to the Czech border. When Josef Klier invited to a knife thrower meeting and competition to his Wellness-Ranch there, seventeen knife throwers from 4 countries (Austria, Czech Republic, Germany and Switzerland) came. The group from the Czech Republic made a good family trip out of it, bringing their partners to this nice place.

Many throwers arrived already on Friday, and used the day for training. In the evening, we sat together in the very cosy saloon-hut, renewing old friendships (for example from the Erlangen 2007 meeting), and making new acquaintances.

On Saturday, the competitions started at around 10 o'clock. The two perfect targets, 20cm thick and mounted on a collapsible frame, were place in a fenced paddock. Two training targets were also available. After we refreshed our memories about the rules (standard rules of the EuroThrowers club), the competitors went to work: 21 throws in each of the disciplines knife 3m, 5m and 7m, and axe 4m. The order was not given, most started with 3m and continued with the longer distances in the afternoon after a good break. The arbiters Stefan, Sepp and Hans duly noted the achieved points. Most throwers had their axes with them, so we voted to have an additional axe 4m discipline (which was not scheduled originally). After gathering the point sheets, we had to have duels: in 4 disciplines, there was a tie in the first three places, so three more throws for points were made. 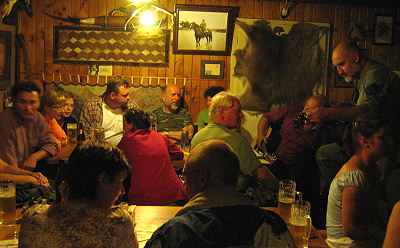 During the following dinner, the throwers recovered well. Afterwards, the winners were awarded certificates. Later, around the campfire, we discovered that you can very well sing songs like "House of the rising sun" in two languages (English-Czech). After a rain-shower sent us inside, we continued singing there, with the help of a especially booked musician who played the accordion and harmonica simultaneously. It was late at night when everybody was finally asleep in his tent, room or tree house.

Thank you very much again, Josef Klier, family and helpers. We are grateful you organised this successful thrower meeting on your Wellness-Ranch!

Christian Thiel
Gabriela Beckmann, thank you very much for the photos marked with GB!

terms/privacy
If you ❤️ KnifeThrowing.info, buy me a coffee
German: Ranch-Werfertreffen St. Roman 2008