9th Russian Open Championship took place in Samara, and on the 5th/6th of July the 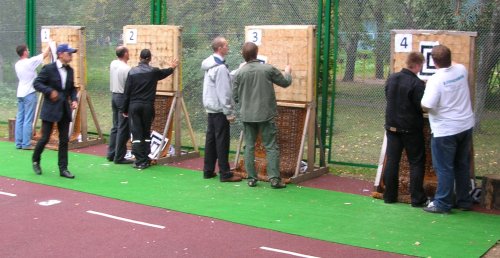 Both competitions proceeded according to Unifight rules. The

Even though the target-layout and scoring differs from the Eurothrowers rules, one can try to compare: For example the 335 out of 600 points (5m distance) of Michail Sedyschev or the 520/600 (3m, Tatjana Ljubimowa) at the Russian Open are very good. The Russians carry the best results as world records. For example during "Silver Knife" the following records were registered: 3m + 5m = 570/600 +430/600 = 1000 by Elena Polynova. Quite impressive! And 370/600 at 9m by Michail Sedyschev is also a very good result.

terms/privacy
If you ❤️ KnifeThrowing.info, buy me a coffee
German: Werfertreffen Russland 2009