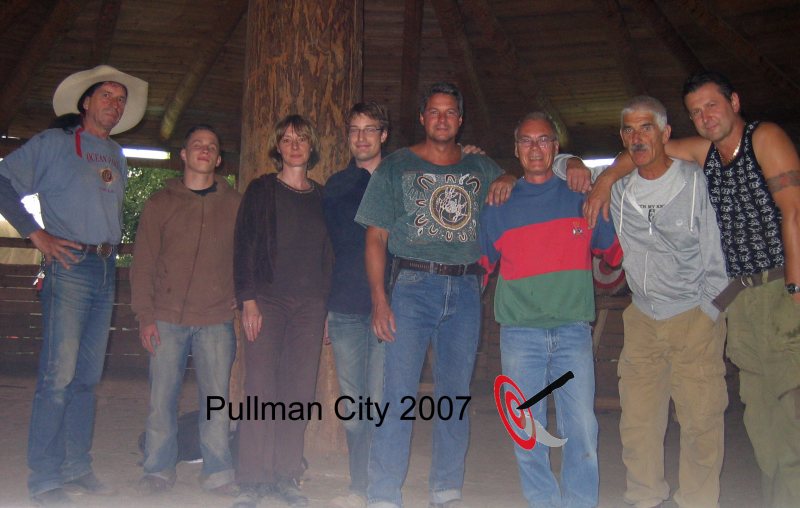 Pullman City, a wild west amusement park in the Bavarian Forest. As the big European meeting was scheduled nearby just a month later, only 9 participants came, mostly highly ranked sportsmen who wanted to assert their performance under competition conditions.

Because of frequent rain, the targets were set up in the round pen, a horse training area with a roof. The targets were sturdy that they can be used again for the next event. Just before noon, we started with the competitions. There was one point-taking-arbiter per thrower (recruited from the other participants), and one main-arbiter, myself, giving the signals for throwing, and heeding the safety.

For lunch, most went to one of the rustic restaurants on site. Also, many visitors of the amusement park were very much interested in getting hands-on experience in throwing, and the professionals were very happy to pass on their knowledge.

After the axe events, there were some undecided discussions if throwing instinctively without a knowledge of the distance to the target is possible. And of course a relaxed throwing together for fun, sometimes from more unusual stances. Here, a stuntman from the park's horse show, "Red Bronc", cut the mustard. We were all very happy to meet such a seasoned thrower, who did not fail to win some events. After the award ceremony, we got hold of some thick steaks, and ended the evening in the saloon. Most throwers stayed in the area until the next day.

I want to take the opportunity to again thank the responsible people from Pullman City, especially Mr. Jeschke, for making this meeting possible!

A very orderly competition: throw on signal, then get your tool back on the next signal.

No, seriously, Red Bronc and Dieter are not related!

Why go straight, if you can achieve the same thing backwards lying on the ground? 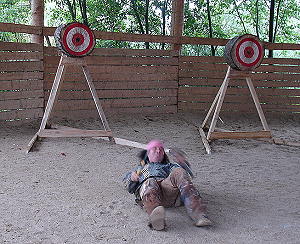 terms/privacy
If you ❤️ KnifeThrowing.info, buy me a coffee
German: Werfertreffen Pullman City 2007