The plan for the 2017 meeting was a small event, it only being a European- and not a World Championship, and not taking place in a very central location. But it turned out to be the first Championship with a waiting list, we had to pull a stop at 150 registrations. As to be expected, about 10% then didn't make it to the event travel wise, and we were 132 athletes (26 of them women). Nine countries participated with a full five-person-team, and four countries were even represented by more than fifteen athletes!

The competitions took place on only two days, the 2nd and 3rd of September 2017. The location for the championship was

Alsómocsolád in Hungary, a quaint and active village of 400 souls (they even have their own local currency). Lunch could be obtained directly on site, or at a picturesque Büfé at the shore. The lakes were teeming with fish and wildlife, and many a thrower had brought their binoculars for bird watching (Pierre spotted a white-tailed eagle).

An abundance of targets - 20 ranges for the precision events alone, and four for long distance - made for happy throwers. It meant you could warm up, and then simply walk up to a precision target to do your competition throws. Some throwers even opted to do all their distances in one go, contributing to an overall smooth and timely flow of the Championship.

After some hot days, clouds brought some hours of rain.

Knife- and axe throwing being an outdoor sports, of course the competition went on. 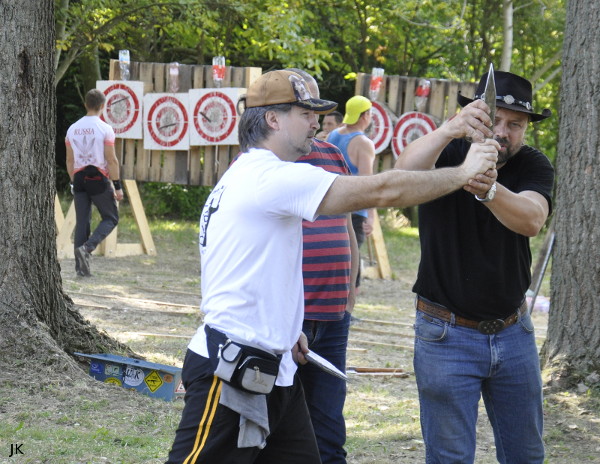 The training areas were, as usual, the place for exchanges on knife throwing techniques (there are plenty of variants) and on throwing knives (where there are even more preferences).

As a surprise, the ten best precision throwers could take part in the local

Rigac Cup. It is a WalkBack event for knives, much as in the EuroThrowers World Championships: Immediately after throwing your three knives from one distance, you have to walk back to the next one and do three more throws. There are four rounds, each requiring three throws from each of the five distances. A majority of the athletes also participated in the long distance events, a full 83 throwers gave the long distance axe throws a try.

The experimental event of speed throwing (most knives in the target in 20 seconds) had already proven its popularity at previous events, but there were also some new additions. At Silhou-Axe, you had to plant your axes into small circles that were arranged around a silhouette (two big circles). The basis for "Hab" was a see-saw, with three targets on each of the two sides. Once set into (ball-bearing facilitated) motion, you had to stick three knives and then three axes. The time restriction of one minute was less challenging then calculating your device's flight time from the distance of 7m.

Instinctive throwing sans rotation this year took place as a full four-round WalkBack. The turnout was about the same as last year, 35 knife throwers had trained to take part in this no-spin event. It is noteworthy that the average score rose from 89 points in 2016 to 101 points this year!

Duel-Cup, two time-taking machines were employed. Even with 84 participants, the Duel-Cup - a quick-draw event - rolled very smoothly. The pairings were shown on a screen, so all throwers knew the name of the partner they had to find for the next round. During the Championship, five throws were flagged as "same time", with the opponents throwing the knife into the target within the same one-hundredth of a second.

Seven new records were established during the Championship. The precision score for knives 5m and 7m was improved, and the record for axe precision throwing (women) jumped to 95 points. The new long distance knife throwing record (men) to beat is now 22.17m - it was the first registered knife throw that stuck at a distance of more than 20m!

Just behind the entry bridge, there was a little market with Hungarian products, a food booth and a bar tent. If you were done with throwing for the day, or just resting, this was the place to meet and exchange on throwing matters and cultural particularities. You could also take your goulash or palacsinta to the big tent, were the crowd gathered in the evenings to wait for the award ceremonies.

The awards were a highlight, closing each day with a stage ceremony where the winners and winning teams received certificates, medals and prices. On Saturday, the mayor himself handed over the prizes. The winner of the Rigac Cup had trouble brining all the goods - including a wooden, hand-carved statue of Jancsi Rigac - back to his seating. Russia participated with 30 throwers, and for the first time reached number one in the country ranking. In a very moving moment Sunday evening, the participants engaged in five minutes of hand-clapping and shout-outs to thank the organisers János and Réka Kohl.

A huge Thank You! to Kohls, the town of Alsómocsolád and the 99 helpers and 16 sponsors for holding the European Championship, and making it a success both as a sporting event and a friendly community meeting for knife throwers and axe throwers from all over the world!


Members meeting of the EuroThrowers association

EuroThrowers umbrella organisation has the objective of making sure that there is a common Championship each year, and negotiates

standard rules for it. The organisation of a Championship is always accomplished by a local club – this year the sports club of Alsómocsolád. The EuroThrowers assist in planning, and take care of the international promotion of the event.

Of special interest were the activity reports of the

22 member clubs, which were available in writing. They allowed to identify common challenges, for example the constant need to raise funds for members to travel to competitions in other regions.

The process for changes to the Standard Rules were detailed: The rules, having been stable since 2010, shall be modernised in the 12 months to come, following a public discussion and a vote between the throwing countries.

As per vote of the general assembly, the

managing committee is now structured as follows: Christian Thiel (DE, chairman), Norbert Maier (DE, vice chairman), Pierre Cazoulat (FR), Duri Vetsch (CH), and Melody Cuenca (USA). A new face is Jan Oswald (CH), who has been elected into the committee on the same ticket as Duri (they will act as one person). Jan's interest is mainly to assist in changing the rules, a process that is also very much driven by Pierre and Duri. Jacqueline Boof (FR) will again act as cashier of the EuroThrowers.

János Kohl, thank you for the photo marked JK.


If there was a tie for one of the first three places of an event, those throwers were rated higher that had a higher number of sticks in the bulls eye/5 points (as indicated in []; if the numbers were the same for all scoring zones going down, additional tie breakers given in () ). A + indicates the points achieved in the additional final.

Original rules of the 2017 Championship

We will have the following standard events:

The combined precision rankings are the basis for the title European Champion Precision, and the ranking of countries. There are no other rankings that combine several events.

As usual, the Duel-Cup will also be held. Pairwise throwing, the participant who hits the target faster after the signal goes on to the next round. An electronic system will determine which thrower sticks it first!

standard Duel-Cup rules will be employed.

Time-preselection will not be employed, but for each duel and participant (at least the very first duel), the best time will be noted and published on the central pyramid score sheet. That way, we'll be prepared for time-based duel schemes in the next years.

The following rules will ensure a smooth proceeding of this year's Duel-Cup:

You throw your knife from the handle, with no spin, in walk-back mode (rules updated since last year).
Detailed No-Spin rules: PDF / OpenOffice

Put as many knives in the target as you can in 20 seconds. Minimum distance 3m. Minimum weight 200g.
Detailed Speed rules: PDF / OpenOffice

Throwing your axe into target-circles that are grouped around two big circles (the silhouette). Hits inside the silhouette will cost you a penalty of minus 10 points. Minimum distance 4m.
Detailed Silhou-Axe rules: PDF / OpenOffice

From a minimum distance of 7m, you throw your knives and axes into targets that are mounted on the arms of a moving seesaw.
Detailed Hab rules: PDF / OpenOffice

terms/privacy
If you ❤️ KnifeThrowing.info, buy me a coffee
German: Meisterschaft Alsómocsolád 2017