Video The Fundamentals of Knife, Hawk and Axe Throwing with an Introduction to the Impalement Arts

Pages of the author

In this 60-minutes video you will see what a professional knifethrower is able to put up.

David R. Adamovich from New York was a minister when he began throwing knives five years ago. Today, he also earns money with his second job as a professional knife thrower and impalement artist. It is amazing how good you can become in this time!

David does not introduce himself, but leaves this job to the people from "Fox News" who aired a short TV-report on "The Great Throwdini" (his stage name). Then he gives some introductory hints concerning the art of throwing knives: 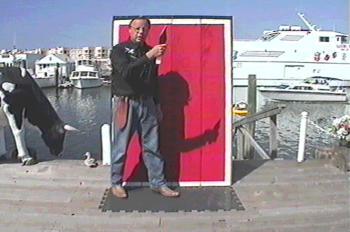 David demonstrates various different styles and stresses the fact that his throwing style works for him and a few others, but that everybody should use the style that feels natural to him. The slow-motion sequences from every angle of view (even from above) give you a good impression of how a throw should look like. And in the frame-by-frame analysis, you can clearly see every single movement.

In the second part David throws very many knives and presents the various targets employed by the different US-American knife throwing associations. Then he demonstrates throws according to the specific competition rules. This part is somewhat boring for non-US people, especially since the camera angle is always the same.

The Great Throwdini has saved the most spectacular part for the end: He throws at (around!) living targets! (Do not try this!!)
Of course, some other topics like throwing axes and "special knives" are covered, but you will have to see for yourself (it is bad style to tell you the name of the murderer before you have seen the film :-)

All in all a very nice video that you can watch on a quite evening. Very many variants of throwing a knife (and axes) are demonstrated, and it is simply astonishing to see David tossing one knife after another into the target. In spite of the slow-motion sequences and the short introduction, this tape is not recommended for beginners. It has a somewhat "academic" feeling.

The pictures were taken from the video.
For those of you who watched the tape: No, even though his target stands in a port right at the water line, Throwdini has not lost a single knife!